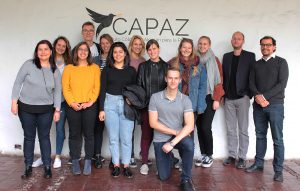 The group from Germany during his visit at CAPAZ. Foto: Claudia Maya/CAPAZ

A group of eleven students, including ten from Germany and one Colombian student visited the CAPAZ office in Bogotá on September 13, 2019.

The students are part of the first cohort of the binational master’s programme entitled “Conflict, Memory and Peace”, a cooperation project between Katholische Universität Eichstätt-Ingolstadt (Germany) and Universidad del Rosario (Colombia). The institutions are associate member and founding member of the CAPAZ Institute, respectively. The programme includes the curriculum and an internship in Colombia during the second academic year.

The group was accompanied by Laura Camila Barrios, coordinator of the master’s program at the Universidad del Rosario, and Carolina Galindo, professor at the School of Human Sciences and CAPAZ spokeswoman.

The visit to CAPAZ had two main objectives: to learn about the work of the institute’s cooperation platform and, in that respect, to explore possibilities of academic cooperation with the master’s program.

CAPAZ in the German Week at UTP Pereira

The Administrative Director of CAPAZ, Dr. Carlos Nupia, will present the lecture entitled “University, International Cooperation and Peacebuilding: the case of the Institute CAPAZ” as part of the programme of the German Week organized by Universidad Tecnológica de Pereira (UTP). 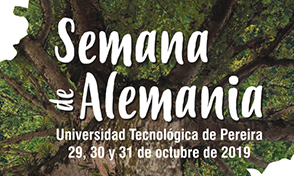 The lecture will present different cooperation models implemented by Colombian universities for supporting the implementation of peace in Colombia. It will also explain the institutional structure of CAPAZ and the cooperation opportunities it offers.

The German Week includes performances and conferences about relevant topics on the German-Colombian academic cooperation.

Further information about the German Week in UTP on the UTP Website (in Spanish).

The XXII Colombian Geography Congress will be officially opened tomorrow, Tuesday, October 22, 2019, with the panel entitled “A Geography for Peacebuilding”. The event will take place at the Jorge Enrique Molina Auditorium, of the Teatro México at Universidad Central in Bogotá. The panel will include the participation of the Academic Director of the CAPAZ Institute, Prof. Dr. Stefan Peters, who will alternate with renowned academics in the field of Colombian geography such as professors Darío Fajardo and Gustavo Montañez, among others. The event is public and will begin at 2:00 p.m.

It is worth noting that as part of its exploratory studies, CAPAZ has promoted the consideration of a critical geography that responds to the challenges posed by the peace process. Hence the importance of supporting this congress, a key milestone for research into peace and conflict from a socio-space perspective.

More information about the congress here 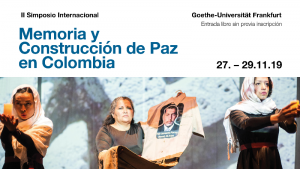 Conferences in Hamburg on social inequalities and land issues in Colombia 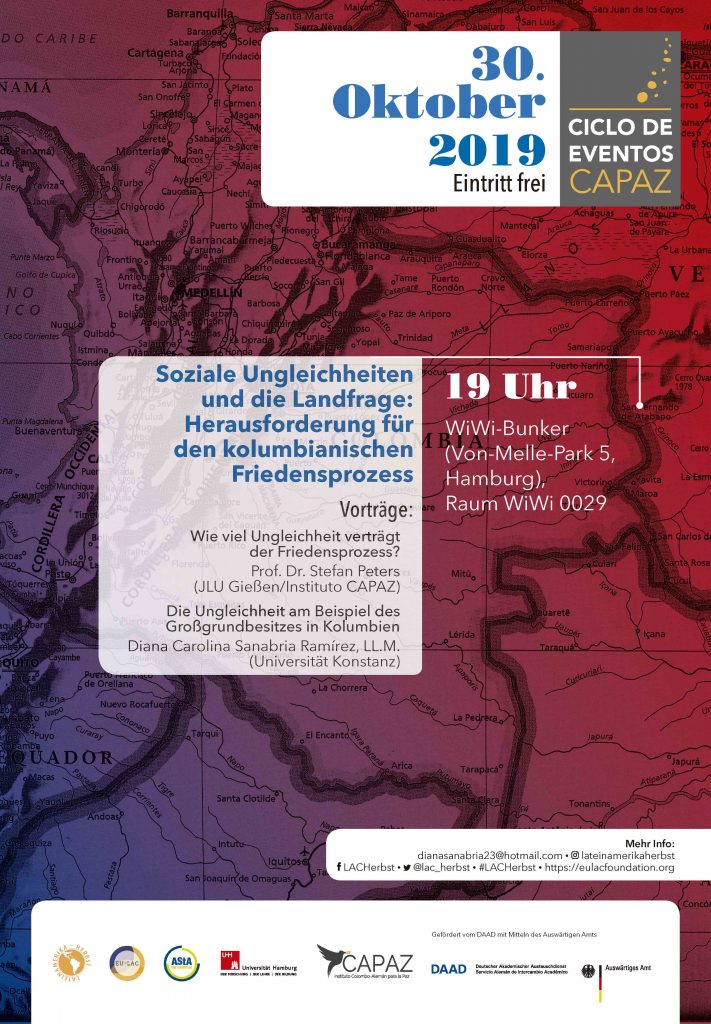 The Colombian peace process is currently beset by difficulties. The debate focuses, above all, on certain points of the Final Agreement. However, one central feature with respect to Colombia remains neglected: extreme social inequalities.

The CAPAZ Academic Director and Professor at Justus Liebig University Giessen, Prof. Dr. Stefan Peters will analyse the challenges for stable and lasting peace in Colombia from the perspective of inequality.

Diana Carolina Sanabria Ramírez (University of Konstanz) will address land distribution as one of the most representative examples of inequality in Colombia. The concentration of productive land in the hands of a few was one of the triggers of the conflict and still represents a challenge for the Colombian State.

The event is part of the agenda for the “Otoño Latinoamericano” festival, organised by the EU-LAC Foundation (Website). 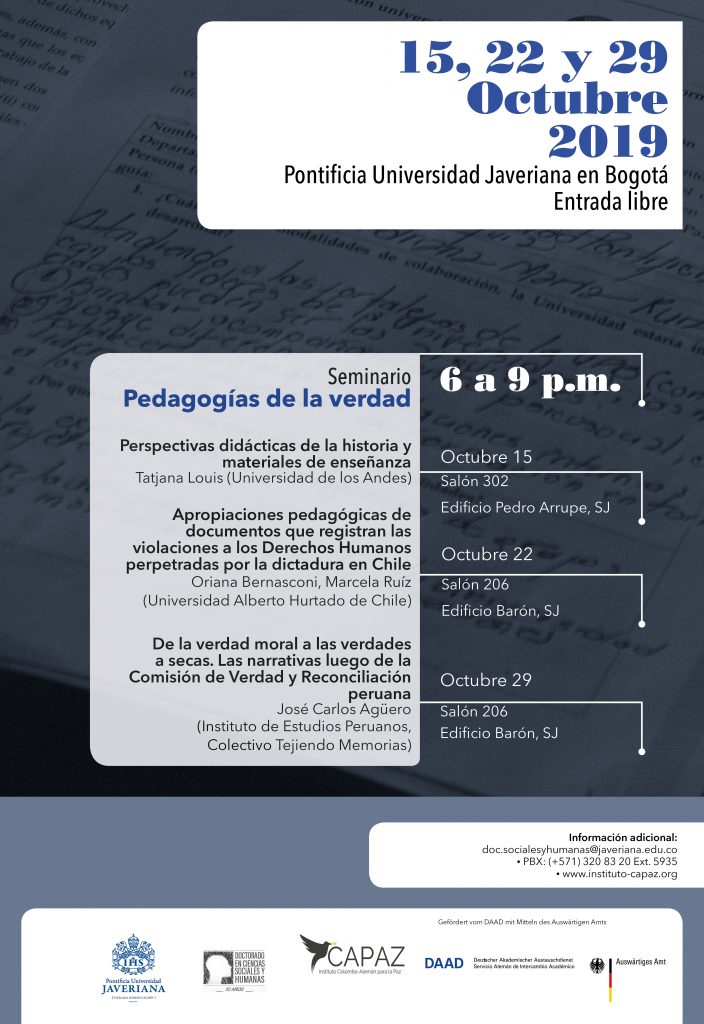 The Doctoral Programme in Social and Human Sciences at Pontifical Javeriana University (PUJ) and the German-Colombian Peace Institute – CAPAZ – invite those interested to the “Pedagogies of Truth” conference.

The seminar will discuss the following questions, among others: what is the role of the final reports in a society that is trying to overcome a violent past? How are the documents that record violations of human rights appropriated pedagogically? How can these reports be answered, socialised and/or taught when the team that formed the Commission has dissolved? Can the final reports permeate the fibbers of the society in transition? What are the spaces and vehicles that can make this permeability possible?

See the seminar programme (in Spanish). 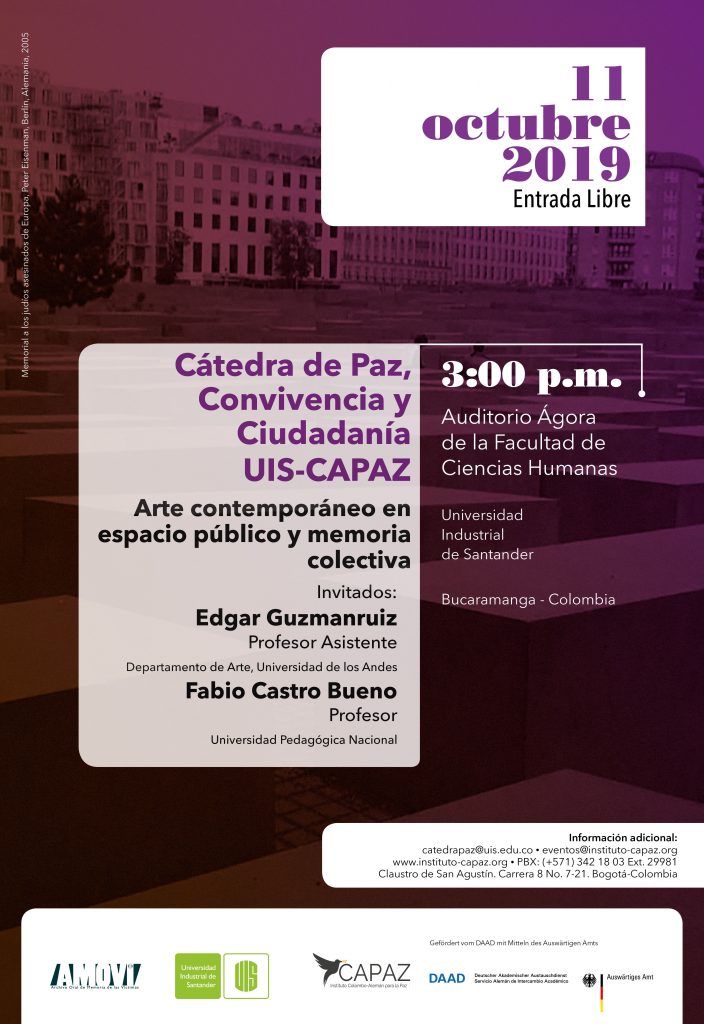 The inauguration for the third part of the Peace, Coexistence, and Citizenship course run at Universidad Industrial de Santander (UIS) will take place on Friday, October 11, 2019 at 3:00 p.m. at the UIS facilities in Bucaramanga (Agora Auditorium of the Faculty of Human Sciences).

This part of the course is called «Contemporary art in public space and collective memory», and it will focus on monuments as representation and transformation of the imaginary in the elaboration of new memories and in the representation of the past, without memory being reduced to a social inscription and symbolic construction.

The course will run from 27 September to 13 December 2019. The course is a CAPA-supported initiative implemented by UIS, specifically the Academic Vice-Chancellor’s Office, the School of Economics and Administration and the Oral Archive of Memory of Victims (AMOVI). UIS is one of the associate members of the CAPAZ Institute.

“THE CHALLENGES FOR COLOMBIA IN THE POST AGREEMENT YEARS”: ROUND TABLE AT FLACSO-ECUADOR 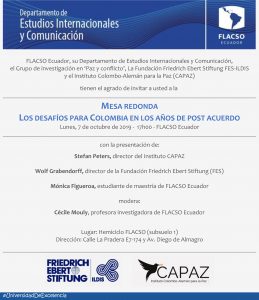 The German-Colombian Peace Institute – CAPAZ, FLACSO Ecuador, its Department of International Studies and Communication, the research group on ‘Peace and Conflict’, and the Friedrich-Ebert-Stiftung FES-ILDIS invite those interested to the round table: “The Challenges for Colombia in the Post-Agreement Years”. 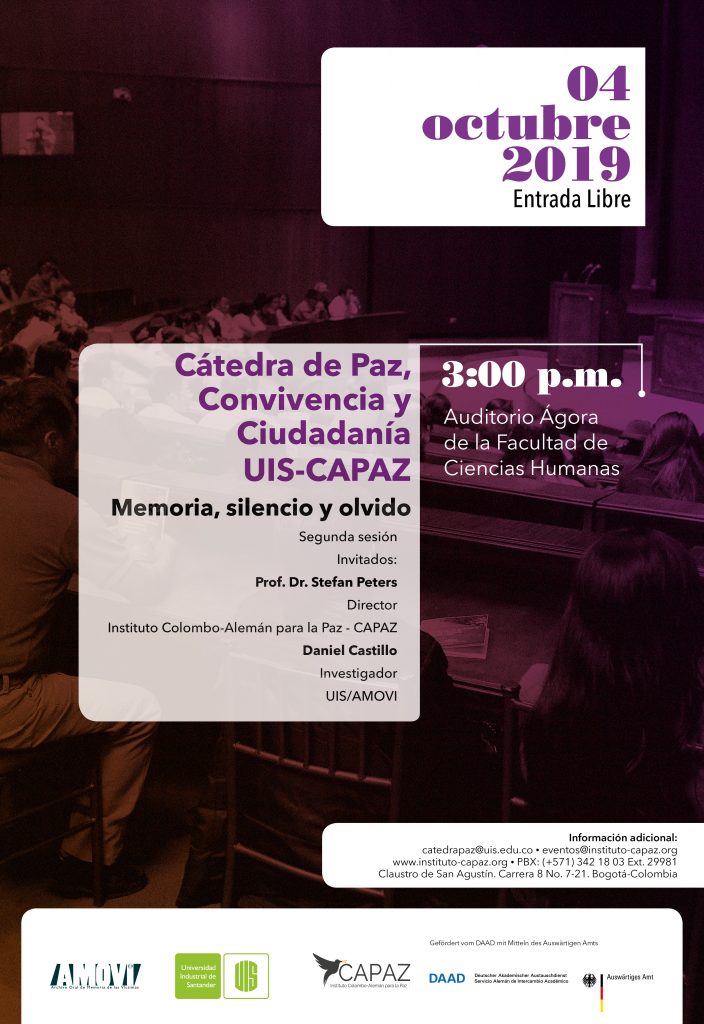 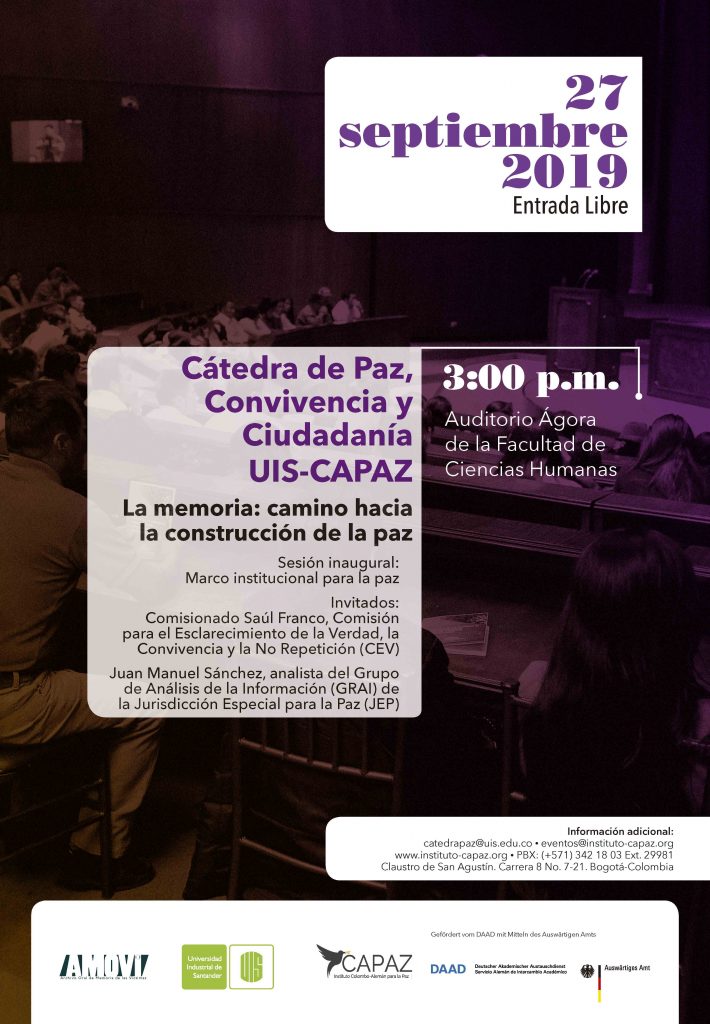 The Peace, Coexistence and Citizenship course at Universidad Industrial de Santander (UIS) will begin on Friday, September 27, 2019 with the inaugural session, with Saúl Franco, Commissioner of the Truth Clarification Commission (CEV) and Juan Manuel Sánchez Osorio, Officer at the Information Analyse Group (GRAI) at the Special Jurisdiction for Peace (JEP) as guests.

For this year, the main goal for the course is to highlight the role of historical memory in peacebuilding.

The course is an initiative implemented by CAPAZ and UIS, specifically the Academic Vice-Chancellor’s Office, the School of Economics and Administration and the Oral Archive of Memory of Victims (AMOVI). UIS is one of the associate members of the CAPAZ Institute.

From September to December 2019, the course will offer twelve sessions during which at least two guest experts -either internal or external members of the UIS- will participate. Each session will be disseminated through the university’s institutional media.

To join the course, students will be enrolled by the UIS School of Economics and Administration. They will be able to access the audio-visual material and the texts of each session on the Moodle platform, which will also be used to develop and evaluate the activities.

Memory: the road to peacebuilding

The Peace course follows the institutional guidelines of the UIS. It is conceived as an academic space for the recognition and construction of the historical memory of the conflict, taking into account the perspective of the victims as a central axis.

Institutions, academia, NGOs and civil society have worked on building historical memory from the voices of the victims. But, the work has been mainly led by the victims themselves, with a view to seeking participatory paths towards truth, justice, and reparation.

The course is open to the university community with a view to allowing it to approach the realities of victims of the conflict and peacebuilders.