Based on the concepts-practices of social organisations, peace is a political process that consists of (re)appropriating a geographic space to develop an economic-cultural project of dignified life, which is ecologically sustainable, and protected from violence and war. The search for peace is territorial because the purpose of dealing with violence is translated into the goal that the territory -that materially and symbolically appropriate living space- will again -or for the first time- fulfil the collective functions that it has lost through the armed conflict. Communities have two interconnected resources with which to restore the collective functions of the living space: their moral imagination and their geographical imagination. The document shows what these two dimensions consist of and how they are connected, arguing that this understanding of territorial peace as a conjunction of moral imagination and geographical imagination is a political-epistemological innovation in the field of peace studies.

PhD in social geography and researcher at the Jena Centre for Reconciliation Studies. Researcher and professor at Universidad Externado de Colombia. Co-founder and member of the Critical Geography of Latin American Root group Georaizal. Contact: luis.b.pena@uni-jena.de

CAPAZ Working Paper: “The art of memory – The memory of art”

“For over thirty years, I have been working as a memory artist and have tried to develop, often in joint projects with Andreas Knitz, new forms of the monument. Our works became known as negative monuments (Negativ-Denkmale in German) or Counter-Monuments. They are not erected on pedestals, nor are they cast in bronze or carved in marble. They deal with emptiness, loss, and silence. Like most post-war German children, I also grew up with silence about National Socialist war crimes and the Holocaust. But children feel the silence in the family, they feel the taboo, and later, as teenagers and adults, they barge in with their questions and never stop for the rest of their lives. That’s how it is with me. In this document, I would like to summarise some of my works with negative monuments or counter-monuments”.

CAPAZ presents the working document (04-2019) dedicated to the theme of memory and art, from the perspective of the German artist Horst Hoheisel.

Horst Hoheisel was born in 1944 in Poznan, Poland. He first studied forest sciences and earned a doctorate with an ecosystem analysis of a tropical rainforest in Venezuela. Simultaneously he studied arts at the Kassel School of Arts, and since 1980 has been working as a freelance artist and visiting professor at the Bauhaus University in Weimar. Together with Andreas Knitz, he has created numerous new forms of monuments, including in Latin America. Horst Hoheisel lives and works in Kassel and Berlin. 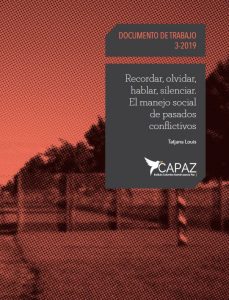 “Remembering, forgetting, speaking, silencing. The social management of conflictive pasts” is the third working document published by CAPAZ in 2019. Its author is Tatjana Louis, researcher and associate professor at the School of Social Sciences at Universidad de los Andes. Her research emphasis focuses on the development of historical awareness, and the teaching and learning of history.

In societies in transition, historical memory is an instrument for the symbolic reparation of victims, the clarification of truth, and the goal of social reconciliation. However, the work of memory in a society goes beyond the time limits of transitional justice and presents a challenge for different generations. Based on the analysis of manuals for teaching history in various historical periods, this text addresses the long-term social management of painful pasts in two different contexts: in Colombia, the period of La Violencia; and in Germany, the Nazi dictatorship and the legacy of the German Democratic Republic. The manuals show what society considers necessary to teach future generations. At the same time, they serve as a mirror of today’s society. An analysis of training processes in schools can therefore shed light on the social development of a historical memory. 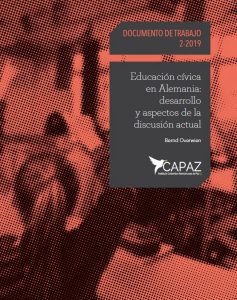 The working document entitled “Civic education in Germany: Development and aspects of the current discussion” is CAPAZ’ most recent publication (Working Document 2-2019). Its author is Prof. Dr. Bernd Overwien, professor of civic education didactics at the University of Kassel, Germany. In the introduction, Prof. Dr. Overwien brings us closer to the definition of the concept in the German-speaking context:

“‘Politische Bildung’ is the term used in German-speaking countries to refer to school and extra-curricular learning activities that prepare or accompany students in the management of politics by acquiring appropriate knowledge and skills. In this respect, political education moves in a relationship of tensions between pedagogy and politics. (Fischer 1972; Mambour 2007, p. 9). Political education is by no means limited to certain age groups: natural and social science classes in primary school prepare students at an early age (6-10 years) to deal with political and social science issues. Civic education as a whole has, in recent decades, resorted to social science knowledge and methods. However, civic education is older and the corresponding lines of progress are drawn and developed in this working paper. The central debates will be outlined on this basis, and finally discussed with a view to current discussions in Colombia”.

CAPAZ Working Paper: “The right to the progressive access to the land ownership” 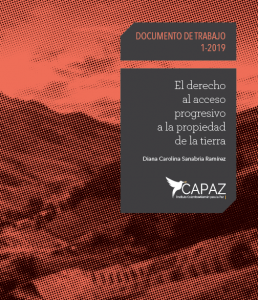 The paper analyzes the extent of the Article 64 of the Political Constituttion of Colombia, which refers to the fundamental right of the farmers progressive access to land. The document also discusses the problem of  high tenure concentrations in fewer hands as an obstacle for the compliance of the Article 64 and it analyzes if the current legal system privileges the right to property of people who concentrate the land.

This working paper is the first of the editorial plan of the CAPAZ Institute in 2019 and contributes to the consolidation of the research area of territorial peace and social inequalities.

Further information is available in the publications section of the CAPAZ website. 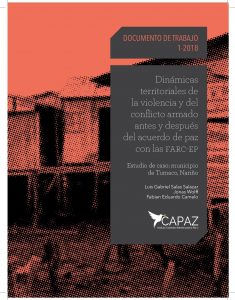 CAPAZ PUBLISHES ITS FIRST WORKING PAPER ON THE DYNAMICS OF THE ARMED CONFLICT IN TUMACO, NARIÑO

The German-Colombian Peace Institute, CAPAZ publishes its first working paper “Territorial dynamics of the violence and armed conflict before and after the peace accord with the FARC-EP. Case study: Tumaco, Nariño”.