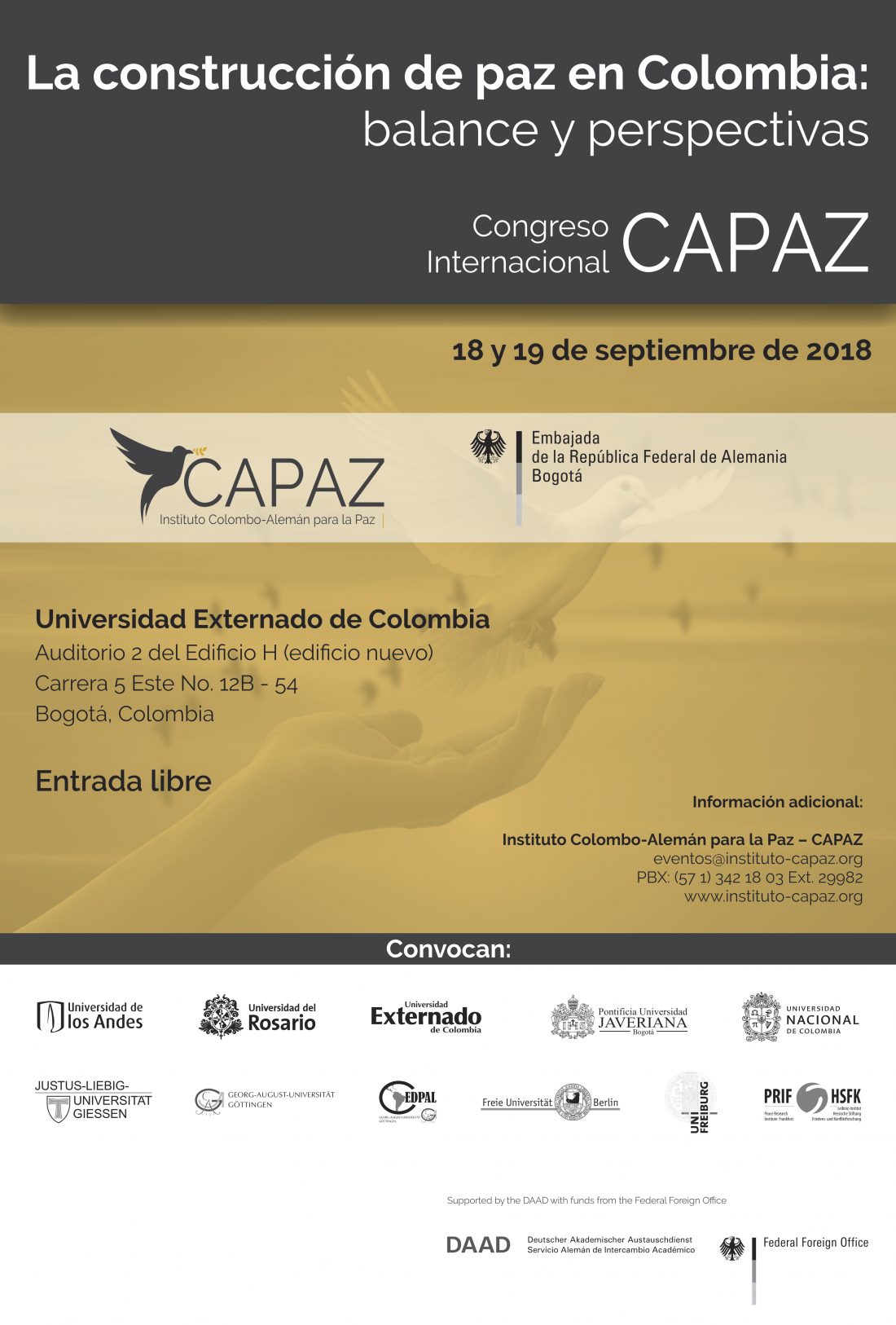 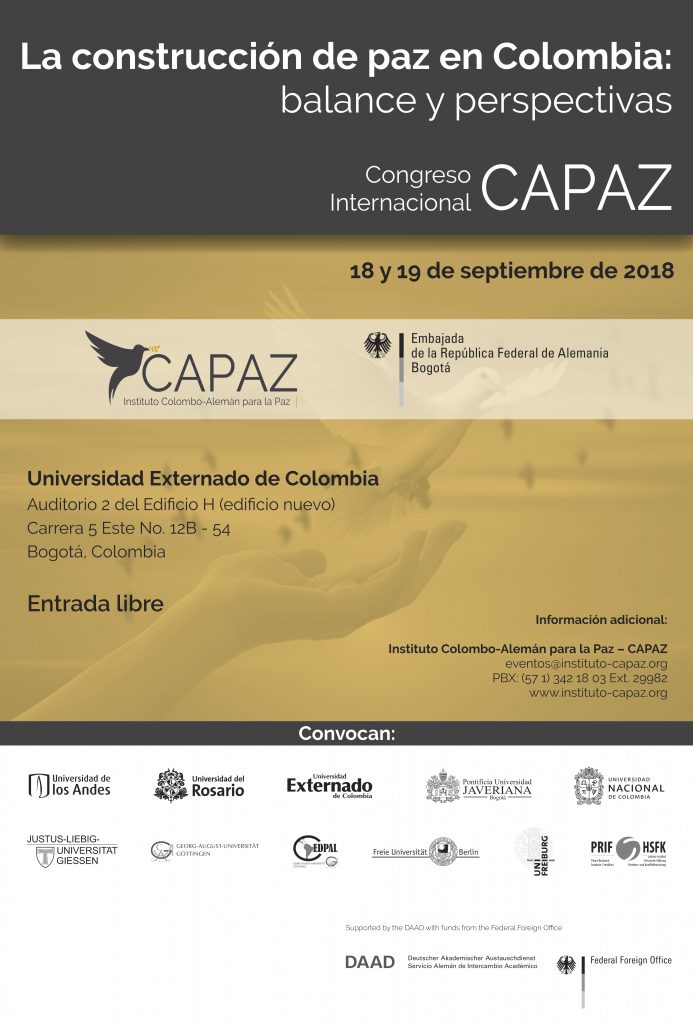 “Peacebuilding in Colombia: Review and prospects” is the title of the first International Congress in Colombia organised by the German-Colombian Peace Institute – CAPAZ with the support of the Embassy of the Federal Republic of Germany in Bogotá.

The academic event will take place on September 18 and 19, 2018 at Universidad Externado de Colombia (Auditorio 2, Edificio H) in Bogotá.

Entry to all the sessions is free of charge and open until full capacity has been reached. All you have to do is the register using the form available here

The congress will be chaired by the German ambassador in Colombia, Dr. Peter Ptassek, and the directors of some of the founding institutions of the CAPAZ consortium, such as Dr. Juan Carlos Henao, President of Universidad Externado de Colombia, and Dr. Joybrato Mukherjee, President of Justus Liebig University Giessen. Dr. Stephan Geifes, director of transnational programmes at the German Academic Exchange Service (DAAD) in Bonn has confirmed his participation. CAPAZ  is supported by the DAAD with funds from the Federal Foreign Office.

This first CAPAZ International Congress in Colombia will include reflection and discussion on the advances and challenges of the implementation of some of the points of the Final Agreement signed by Colombia’s government and the demobilised FARC-EP. The topics will be approached from different disciplines and through case studies based on the work carried out with local actors and communities in different regions of the country. Highlight is the participation of social organisations and regional universities.

The CAPAZ congress to be opened by a debate on memory, truth, and justice

The sessions will begin on Tuesday, September 18 with a roundtable discussing the processes of memory, truth, and justice. Representatives from justice and peace institutions created in virtue of point 5 of the Final Agreement will take part in the event. These include: Rodolfo Arango, Special Jurisdiction for Peace (JEP) magistrate; Luz Marina Monzón, director of Search Unit for Missing Persons (UBPD), and a delegate of the Truth and Reconciliation Commission (CEV).

The Integrated System of Truth, Justice, Reparation and Non-Repetition in the CAPAZ Congress agenda

The Special Jurisdiction for Peace (JEP) has been at the centre of much controversy, which began even before it formally began operations. In the first panel, experts will discuss the principles, the structure, and the challenges of JEP, guided by Yesid Reyes, professor at Universidad Externado de Colombia; Kai Ambos, German jurist, JEP amicus curiae and Director of CEDPAL at the University of Göttingen; María Camila Moreno, Director of Internacional Centre for Transitional Justice (ICTJ) in Colombia, and Dr. Lorena Vega, researcher from Pontificia Universidad Javeriana. 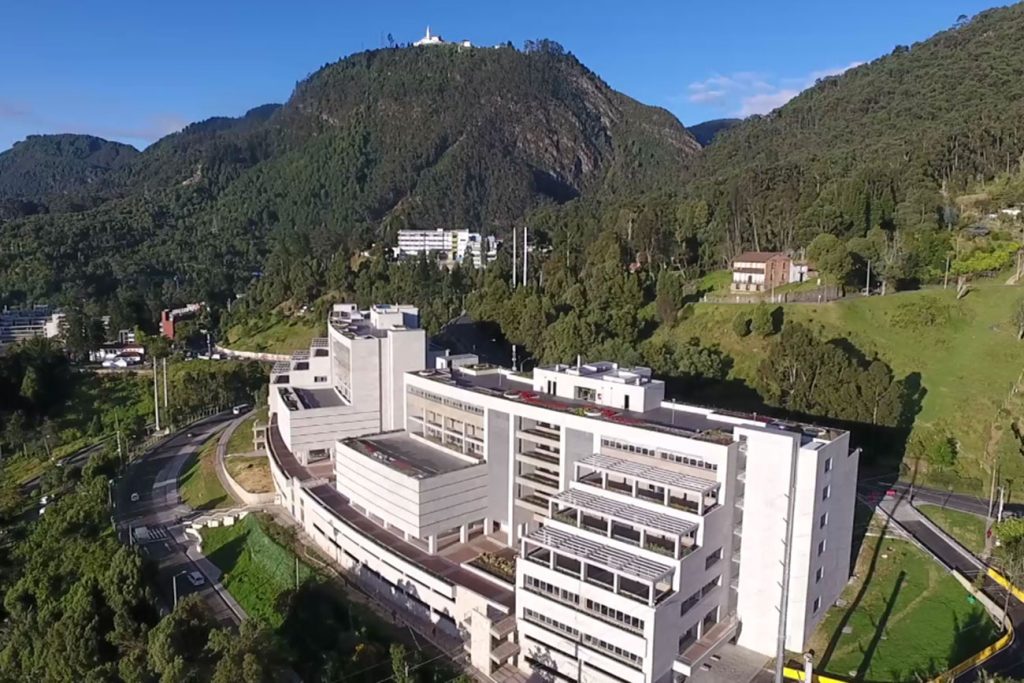 The first day of the CAPAZ International Congress will end with interventions by researchers from German and Colombian universities. Marianne Braig from Freie Universität Berlin; Dora Díaz from Universidad Nacional de Colombia; Fernando Urrea from Universidad del Valle, and Jairo Baquero from Universidad del Rosario will present a number of social issues relating to ethnicity and race, and class and gender within the context of peacebuilding in the midst of inequality, stigmatisation, and resilience.

Peacebuilding and work carried out with communities in Colombia’s regions is multifaceted and subject to complex realities. Wednesday September 19 will host critical current debates such as the integration of former combatants, the financing of the postconflict, socio-environmental and productive perspectives in the territories, and the construction of historical memory.

Eleonora Lozano, researcher at Universidad de los Andes, will present some novel ideas based on her research on the funding of the postconflict, whereas Mario Hernández from Universidad Nacional de Colombia will do so focusing on health in the postconflict.

The construction of historical memory

The CAPAZ Congress will end with a panel on the different experiences in the construction of historical memory in Colombia, concretely from a cultural perspective and through an audio-visual and educational approach. It will also discuss the work with the victims. Ivonne Suárez from Universidad Industrial de Santander; German researchers Anika Oettler and Julian Reiter from the University of Marburg in Germany; Mónika Contreras from Freie Universität Berlin; and Sandra Carolina Patiño, researcher at Universidad de Ibagué, will take part in the panel.

You can register using the form available here

Click here to download the programme for the CAPAZ Congress (in Spanish) or write to us at eventos@www.instituto-capaz.org for more information.