The German-Colombian Peace Institute – CAPAZ is pleased to announce the beginning of its first Spotlight on Peace Calendar (Ciclo de Eventos CAPAZ).

From September to December 2018, the Ciclo de Eventos CAPAZ will include academic and cultural activities such as panels, talks, and presentations of artistic, audiovisual and photographic projects focusing on current peacebuilding issues in Colombia.

All scheduled activities are free of charge and open to the public until seating capacity is reached and will take place at CAPAZ headquarters in the San Agustín Cloister in Bogotá, Colombia (Carrera 8 No. 7-21).

Save the Date for the Ciclo de Eventos CAPAZ 2018! 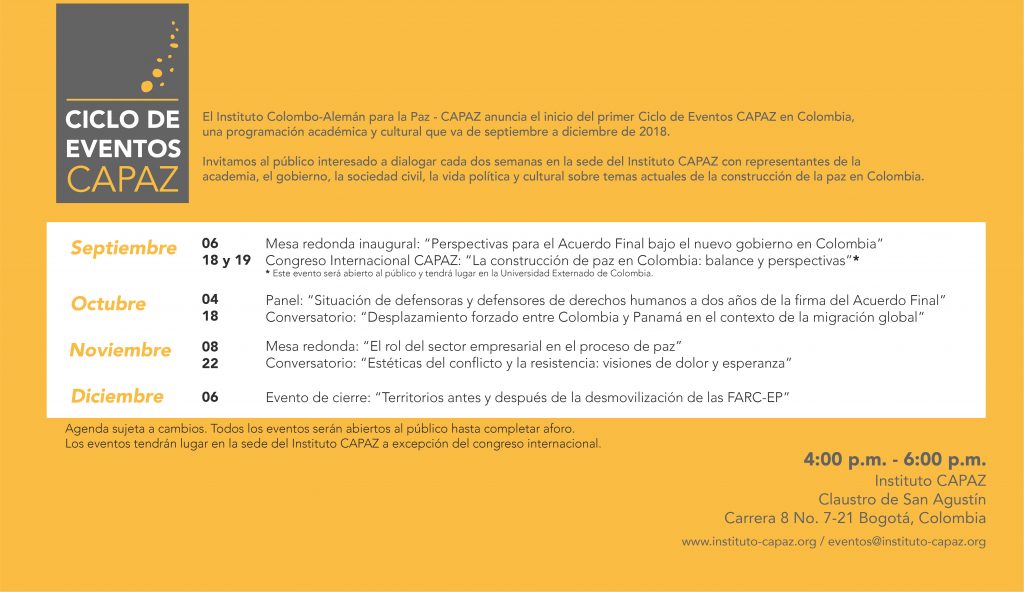 The Kick-Off event will be the roundtable “Perspectives for the Final Agreement under the new government of Colombia” on Thursday, September 6, 2018, at 4:00 p.m. The admission is free until full capacity is reached.

The roundtable is part of the Semana por la Paz, a national activity that highlights social initiatives in peacebuilding in Colombia.

Is it possible to modificate the Final Agreement signed in Havanna? What are the perspectives of the agreements during the mandate of President Iván Duque? We invite you to discuss these and other issues together with our special guests: 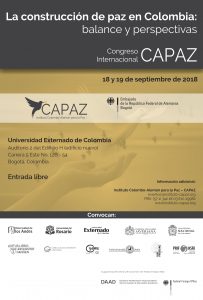 The CAPAZ Institute and the German Embassy in Colombia are pleased to invite you to the first CAPAZ international conference in Colombia “Peace building in Colombia: assessment and perspectives”.

The conference will be held on 18 – 19 September 2018 at the Universidad Externado de Colombia, one of the founding institutions of the CAPAZ Institute (Auditorio 2, Edificio H – New building located on Avenida Circunvalar Carrera 5 Este No. 12B-54 in Bogota).

Recognized government and civil society representatives, researchers from Germany and Colombia, representatives of Colombian and German universities will participate in the panels.

The event will be free of charge and open to the public. An attendance registration is required through the following registration form

For more information on the Spotlight on Peace Calendar and the CAPAZ Conference please write to us at eventos@www.instituto-capaz.org