“Communication in a peace process cannot be one-sided”: Stefan Peters on the Wissenschaftskomunikationo portal

“Communication in a peace process cannot be one-sided”: Stefan Peters on the Wissenschaftskomunikationo portal 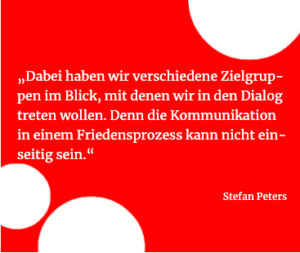 The German news and current affairs portal on communication science recently published an interview with CAPAZ Academic Director Prof. Dr. Stefan Peters in connection with the distinction awarded to CAPAZ by the German Federal Ministry of Education and Research (Bundesministerium für Bildung und Forschung-BMBF) for its communication activities in the field of scientific and academic diplomacy.

The interview covered topics such as the birth of the Institute, its recent activities in science diplomacy and the impact of the protests that took place this year in Colombia. They also emphasized the concept of communication that CAPAZ has been building since its inception: “We have to try to reach as many different groups in Colombian society as possible”, said Prof. Peters. To do so, it is important to experiment with formats that contribute to the discussions and complexities s 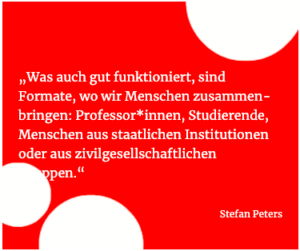 urrounding the issue of memory, conflict, and post-conflict in Colombia. Through these explorations, the CAPAZ Institute has reached various groups of citizens, decision-makers, media, and young people in different parts of the country. In general, the Institute’s communicationsactivity has addressed a diverse audience, which strengthens the objective of academic diplomacy and understanding between peoples.