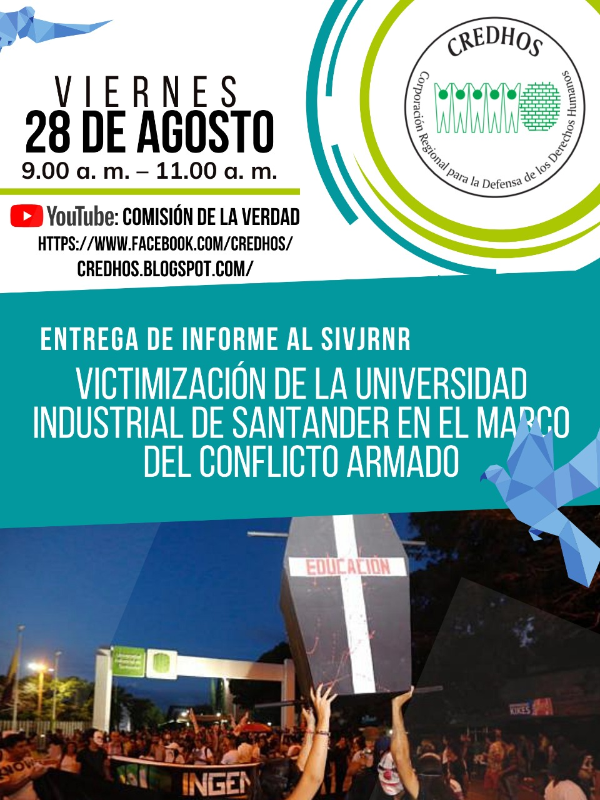 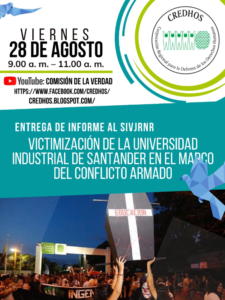 The Truth Commission and the other components of the Truth, Justice, Reparation and Non-Repetition Comprehensive System will be handed a report on the relations and impacts of the armed conflict at Universidad Industrial de Santander (UIS) on Friday, August 28, 2020, from 9:00 a.m. to 11:00 a.m. The report is published under the title: “Extended, continuous, systematic, and premeditated political genocide: Victimisation of Universidad Industrial de Santander in the framework of the armed conflict. 1947-2011”.

The online delivery of the report will be transmitted through the Truth Commission’s Youtube channel and on the social networks of the Regional Corporation for the Defense of Human Rights – CREDHOS.

The guests at the scheduled event will include representatives of the Truth Commission; the Special Jurisdiction for Peace (JEP); and the Search Unit for Missing Persons (UBPD); investigators from CREDHOS; CAPAZ-associate member UIS; and  victims and their relatives.

This report is of great relevance as a contribution to making visible the impact of the Colombian armed conflict on the academic community. This open space is also conceived as an invitation, on the one hand, to debate within Colombian higher education institutions and universities, and, on the other, for public collective reflection on the relationship between universities and the armed conflict. The UIS is an associate member of CAPAZ.