Prof. Dr. med. Michael Wirsching and Dipl. Psych. Anne-Maria Müller, academic coordinators of the project “Improvement of mental health of displaced populations to urban areas in Colombia“, gave an interview to the Colombian newspaper El Espectador. They explain the backgrounds and progress of the project, which aims to train medical care staff and public health professionals from the Department of Cesar and in the treatment of psycho-social diseases of victims and demobilized FARC-EP members. 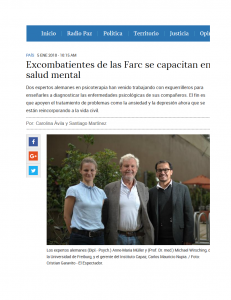 Cover of the interview in El Espectador 2020

The German researchers of the University of Freiburg speak about their experiences and the potential of training public health professionals and ex FARC-EP members, who have themselves empirical knowledge. The researchers have been working in the Department of Cesar, north of Colombia, with the participation of the government of the local government (Secretary of Health). The objective is to replicate their training model in other regions in Colombia, like La Guajira and Bogota.

The project is a cooperation initiative between the University of Freiburg (Universitätsklinikum Freiburg) in Germany, and the Department of Psychosomatic Medicine and Psychotherapy of the Institute of Public Health of the Pontificia Universidad Javeriana in Colombia. It is funded by the program Partnerships for the Health Sector in Developing Countries (PAGEL) of the German Academic Exchange Service (DAAD), with the support of the CAPAZ Institute.

You can read the interview with Prof. Dr. med. Wirsching and Dipl. Psych. Anne-Maria Müller here (article in Spanish)