From 23th to 25th April of 2019, researchers from Colombia, Germany, Spain, Switzerland and the United Kingdom participated in the International Workshop entitled “The peace process in Colombia: Security Reconfigurations and International Responses”. The workshop took place at the Willy Brandt School of Public Policy at Erfurt University, associate member of the German-Colombian Peace Institute CAPAZ.

The workshop was implemented in cooperation with the network Rodeemos el Diálogo, ReD (Let’s surround us with dialogue) between researchers from the UK and Colombia. It was organized by Prof. Dr. Solveig Richter as part of her research on post-conflict transformations in Colombia.

The workshop focused on the reincorporation process of more than 10.000 former FARC combatants. Other topics were the security on the Colombian-Venezuelan border, the substitution program of illegal crops, the new configurations of natural resource management in Colombia and new peace education.

The participants agreed to publish a public declaration about the current uncertainties regarding the peace process, notably about the economic and security situation of demobilized former FARC combatants.

During the workshop, Andrei Gómez-Suarez conducted his lecture entitled “Civil Society Support and Transnational Peacebuilding: Between Democracy Promotion and Political Interference”. Gómez-Suarez is associate researcher on Memory and Reconciliation at University of Bristol, honorary senior associate researcher at the UCL Institute of the Americas and founder of the academic network Rodeemos el Diálogo, ReD. He argued that changes at the top political level, namely the election of president Trump in the US and president Duque in Colombia, negatively affected the implementation of the Final Agreement at the local level. 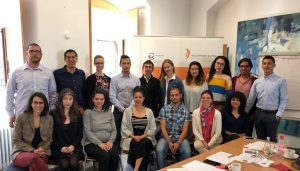 On Tuesday, 23th April took place the Café Internacional. The students of the Erfurt University were invited to this cultural activity about traditions from different countries. Colombia shared typical Colombian food and snacks. The documentary Chocolate de Paz was screened, followed by a discussion with its director Gwen Burnyeat (Documentary available online).

The workshop was financially supported by the Leibniz Foundation and the Research Network on External Democracy Promotion (EDP). Download the program of the workshop (Spanish).