OnePager#7: Reproductive politics in war and peace in Colombia 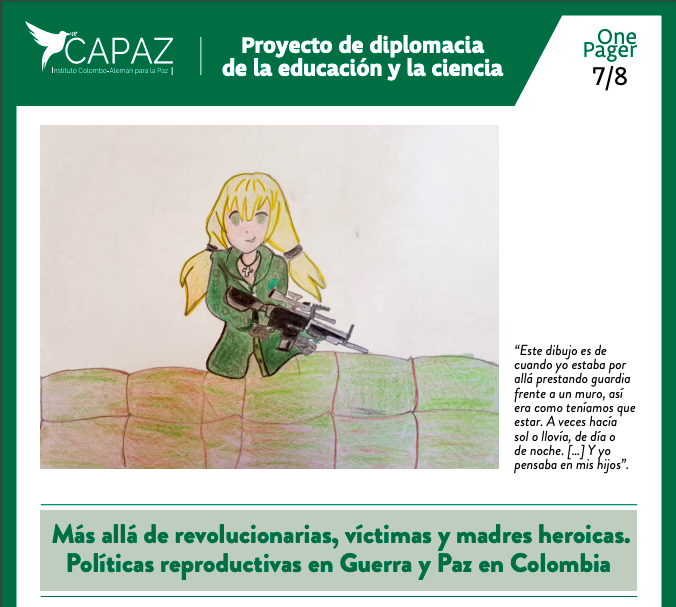 OnePager#7: Reproductive politics in war and peace in Colombia

In this instalment of the OnePagers we have been publishing in the framework of the CAPAZ Education and Science Diplomacy project, we talk about sexual and reproductive rights. Specifically, we try to understand the relevance of this issue in the context of the Colombian armed conflict and the transition to peace.

This OnePager is titled Beyond revolutionaries, victims and heroic mothers. Reproductive politics in war and peace in Colombia and was written by Vanesa Giraldo Gartner (University of Massachusetts). Dr. Girlado also serves as a CAPAZ Science Collaborator.

This research addresses the discussion on the reproductive policies of the FARC guerrilla group, which in recent years have become a site of dispute in the production of new discourses on peace, gender, and the nation. In other words, it “explores the implications of reproductive policies in times of war and in peace-building processes among female ex-combatants“.

This research is based on four years of ethnographic work from 2017 to 2021 where we conducted:

Based on the concepts listed below Vanesa Giraldo was able to extend the reflection on reproductive violence beyond abortion and forced contraception, to recognise the violence to which combatants who were persecuted and mistreated during pregnancy by other armed groups and by the state were subjected.