THE GOVERNANCE OF KNOWLEDGE FOR PEACE 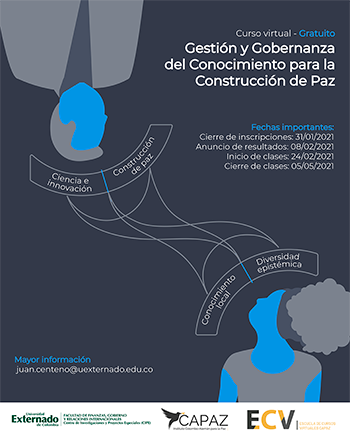 Building territorial peace implies anticipating knowledge requirements in the short and medium term. The possibility of understanding how different forms of knowledge interact to solve problems derived from the armed conflict opens a significant horizon for taking advantage of science, technology and innovation (STI) as a factor in local development. This course reflects on the nature of this interaction, and identifies mechanisms that explain it and tools that enhance it. It is a space for academic exchange, intended for agents of change who wish to strengthen capacities to take advantage of various sources of knowledge involved in peacebuilding.

To provide conceptual, analytical and methodological tools to understand phenomena such as the co-creation and use of knowledge in multi-stakeholder and multi-sectoral peacebuilding contexts.

FORMER COMBATANTS AND TRANSITIONAL JUSTICE: EXPLORING THE COMPREHENSIVENESS OF THE SYSTEM 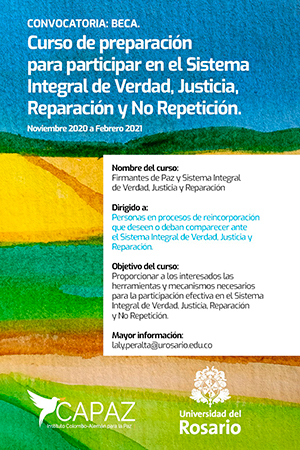 This educational and academic space is designed exclusively for former FARC combatants who wish or are obliged to participate in the Comprehensive System of Truth, Justice, Reparation and Non-Repetition.  If you are a former combatant who needs to better understand the spaces of participation that the System has designed for people in the process of reincorporation, this course is for you. Three courses will be run during 2020 and up to the middle of 2021, aiming to provide the majority of former combatants with access to this information.

The purpose of the course is to explore the relevance of former combatants’ participation in the System both for their social and political reintegration process and for the fulfilment of victims’ rights.

This educational and academic space is designed exclusively for former FARC combatants who wish or are obliged to participate in the Comprehensive System of Truth, Justice, Reparation and Non-Repetition. The course is linked to the module of the “Dissemination of Coexistence Experiences” initiative implemented by the Truth Commission’s Central Andean macro-region

SUB-NATIONAL PERSPECTIVES ON THE ARMED CONFLICT IN COLOMBIA: CHANGES IN THE DYNAMICS OF ARMED VIOLENCE IN THE POST-FARC-EP CONTEXT 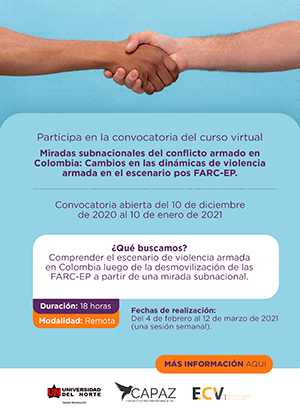 This course offers a novel perspective on how the armed conflict in Colombia fragmented to give rise to multiple autonomous armed confrontations. In this respect, we will analyse power relations and struggles around the territory, but always through a sub-national perspective, thus validating the hypothesis that the continued existence of territorial armed conflicts is an impediment to peacebuilding in Colombia.

To understand the context of armed violence in Colombia after the demobilisation of the FARC-EP from a sub-national perspective.

This course is intended for social science professionals or university students in their final two academic semesters who are interested in peacebuilding and the regional dynamics of armed violence, as well as public officials in positions related to security, development, and peacebuilding issues.

TERRITORIAL CHALLENGES FOR PEACEBUILDING IN COLOMBIA - NATIONAL AND INTERNATIONAL PERSPECTIVES - 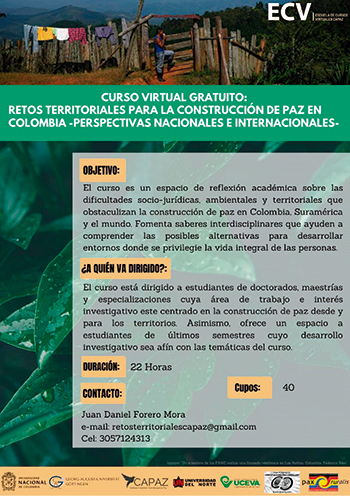 The course offers an academic setting with a socio-legal, pedagogical-legal, transdisciplinary and comparative international perspective, which analyses the main problems faced by territories in building a harmonious coexistence between people and communities immersed in different structural conflicts.

The course is a space for academic reflection on the socio-legal, environmental, and territorial difficulties that hinder peacebuilding in Colombia, South America, and the world. It promotes interdisciplinary knowledge that helps to clarify the possible alternatives available for developing environments that favour people’s lives overall.

The course is intended for specialisation, master’s, and doctorate students whose area of work and research interest concerns peacebuilding from and for the territories. It also offers a space for students in their final semesters whose research is related to the themes covered on the course. 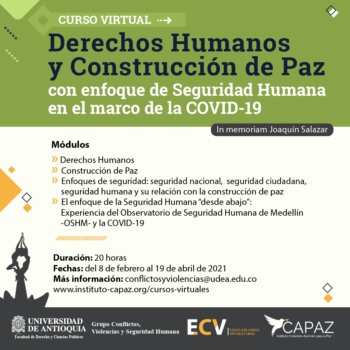 The course provides a joint approach to peacebuilding, human rights, and human security. It is an exercise that will articulate specialized knowledge on these subjects with the view that organisations and social leaders have of them. The course will present topics such as: basic foundations of human rights, challenges of peacebuilding in the post-agreement period, approaches to security and, social mobilisation and perspectives for change.

To promote the study of human rights and territorial peacebuilding from a human security perspective. A large part of the reflections on these issues will be raised in the context of the COVID-19 pandemic in the city of Medellin.

To people interested in peacebuilding, human rights, and human security. A diverse audience is expected including social leaders, human rights defenders, public officials and scholars of the issues to be addressed on the course.

School of Law and Political Science 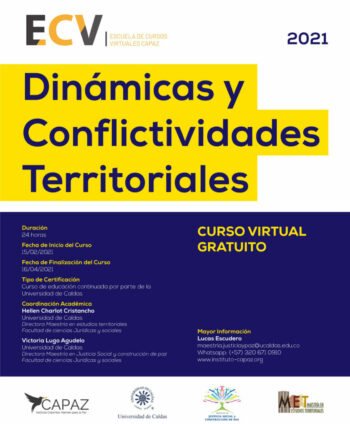 This course is intended to help understand the impact of territorial conflicts on the processes of social injustice and violence in Colombia. It offers theoretical and practical tools based on which to understand territories as “spaces of governance” whose conflictivity results from the contradictions produced by the social relations of class, social groups and institutions that create heterogeneous territories and dispute development and social projects.

The course is designed to delve into the processes of territorialisation – deterritorialization and reterritorialization (TDR) involved in the Colombian armed conflict, its impacts at local level, and the mechanisms that produce unjust geographies. Accordingly, it is designed so that participants can analyse the challenges that territorial dynamics and conflicts present for peacebuilding in Colombia as a society in transition.

Master’s or doctoral students in social sciences or related fields from Colombian and German CAPAZ-member universities interested in studying the field in greater depth.

Department of History and Geography

Director of MA in Territory Studies

MA in Social Justice and Peacebuilding

CLUES TO UNDERSTANDING THE ARMED CONFLICT 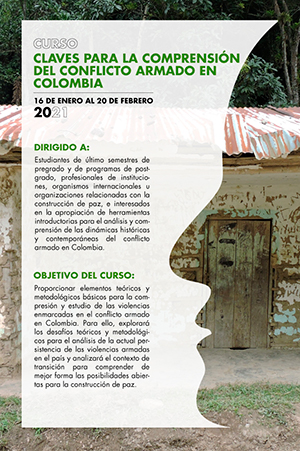 The course will provide an insight into some of the main research developments and key interpretations in the field of armed conflict and peacebuilding studies in Colombia, providing an overview for non-specialists, based on the perspective of experts in the field.

The course provides basic theoretical and methodological elements based on which to understand and study violence in the context of the armed conflict in Colombia. To this end, participants will explore the theoretical and methodological challenges in terms of the analysis of the current persistence of armed violence in the country, and examine the context of transition in order to better understand the possibilities opening up for peacebuilding.

Students in their final semester of undergraduate and graduate programmes, professionals from institutions, international bodies or organisations related to peacebuilding and interested in appropriating introductory tools for the analysis and understanding of the historical and contemporary dynamics of the armed conflict in Colombia.

Department of Anthropology, School of Human and Social Sciences

EDUCATION AND POLITICS OF RECONCILIATION: LIMITATIONS AND POSSIBILITIES OF A CONCEPT UNDER DISCUSSION 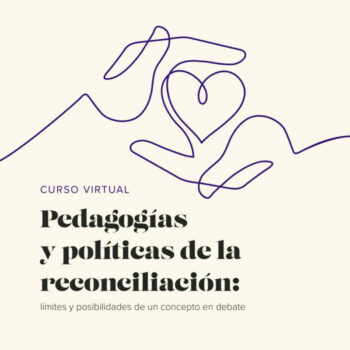 Reconciliation is a widely used and contested concept in peacebuilding, even in societies not affected by armed conflict. The course outlines the origin, development and implementation of the concept in academic debates and in the practice of peacebuilding. It also considers its individual and collective scope and limitations, and explores the variety of practices in which reconciliation is implemented. It also promotes participation in diverse regional, institutional and organisational experiences.

To learn about the different inter- and trans-disciplinary approaches and debates on reconciliation in the context of peacebuilding.

To contribute to the consideration of professional or activist practice in matters related to reconciliation such as the promotion of coexistence, the (re)construction of fabric and the promotion of new non-violent practices of social interaction.

To strengthen dialogue and collaboration skills among heterogeneous groups.

The course is designed for those who have an interest in reconciliation initiatives: professionals from public entities and social organisations, community leaders, development workers, activists, and university students (undergraduate and graduate).

Department of Language and Culture 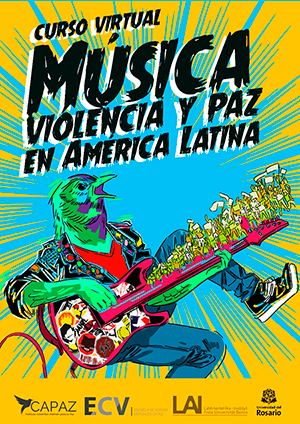 The phenomenon of violence and peace in Colombia and Latin America has also manifested itself in their music, where censorship and repression converge with resistance and counter-hegemonic discourses. This course offers an approach to music, understanding it as an educational tool and as an object of study of the social and political conflicts of the country and, in some cases, of the continent.

Articulating approaches from the Anthropology of Music and Political Science, we will analyse the relationship between sounds and drug trafficking, punk as resistance in contexts of urban violence, musical productions by insurgents and victims, and the involvement of musical celebrities as political actors.

The aim is for the students to acquire analytical tools to approach the conflicts and violence in Colombia and Latin America from the cultural and sound productions derived from these contexts.

GEOGRAPHICAL ANALYSIS OF TERRITORIAL CONFLICTS AND PEACEBUILDING: CONTRIBUTIONS FROM COLOMBIA TO PEACE STUDIES 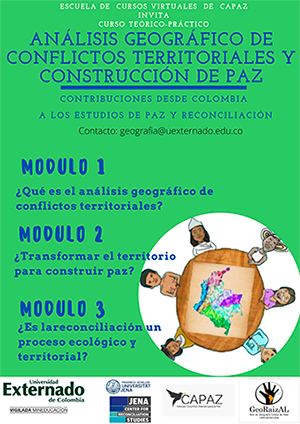 Because the geography programme at Universidad Externado de Colombia has a history of understanding the territorial dynamics of implementing peace agreements, and conducts various academic and outreach activities to this end. The course is run in association with the Centre for Reconciliation Studies at the University of Jena (Germany), thereby generating a dialogue between the Colombian process and other similar processes that have taken place in various parts of the world. Another reason for taking this course is the geographical perspective proposed to advance in the understanding of the territorial configuration of socio-environmental, economic and cultural conflicts, in areas where communities and the State have proposed ways to build a plural, stable and lasting peace.

Our goal is to develop an approach and a conceptual and contextual understanding of the geographical dimension of socio-political conflicts, in order to identify challenges in the construction of territorial peace in Colombia. It also seeks to highlight the contributions that the Colombian case can make to peace studies globally.

Professionals and students from different disciplines, Colombian and foreign, from the earth sciences, social and legal sciences, together with social leaders, community organizations, project coordinators, as well as all those interested in working in territorial conflict analysis and peacebuilding.