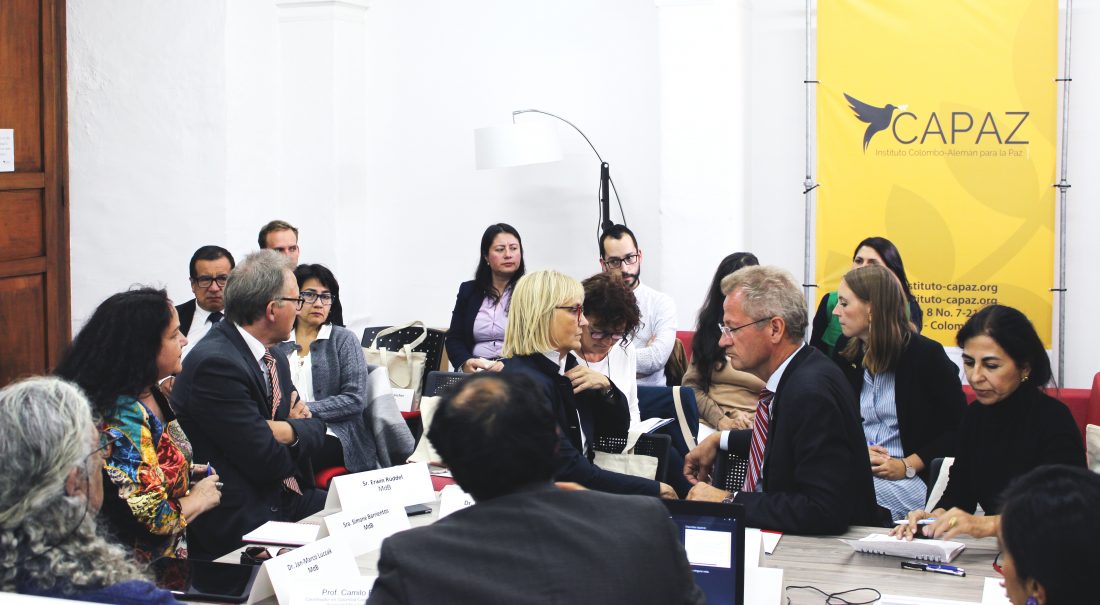 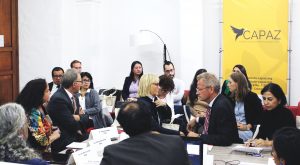 The Bundestag delegation for relations with the countries of the Andean Community (Parlamentariergruppe Anden-Staaten) met with CAPAZ representatives at its office in Bogota.

The Bundestag delegation learned about the work of the CAPAZ Institute and spoke with a group of representatives for social and human rights organizations invited by the German Embassy in Colombia.

CAPAZ in the context of the peace process

At the beginning of the meeting, the representative for Universidad Nacional de Colombia as one CAPAZ founding institution, Dr. Camilo Borrero presented the general objectives of CAPAZ in the context of the Colombian peace process: a) to support the peacebuilding process especially from the territorial perspective; b) to contribute to the strengthening of peace institutions within the Integral System of Truth, Justice, Reparation and Non-Repetition, and also of those entities with local incidence; c) and to promote a sustained dynamic of work between Colombian and German academia.

A more detailed description of the CAPAZ structure, research lines, projects and activities was presented by Dr. Carlos Nupia, Administrative Director of the institute. 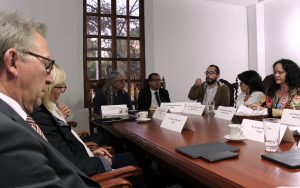 The Final Agreement and the troubled outlook for its implementation

During the meeting, representatives of different civil society sectors explained the delays and setbacks in the implementation of the Final Agreement signed in 2016 between the Colombian government and the FARC-EP guerrilla.

They questioned the failure of the current Colombian government to comply with some of the fundamental points of the Final Agreement and the way in which the government promotes some actions that run counter to the provisions of the agreements. For example, they mentioned the fumigation of illicit crops via glyphosate spraying and the drug policy. For the activist voices, this is a sign of the government’s little or no willingness to implement the Final Agreement.

They also expressed concern about the situation of the victims of the armed conflict, of social leaders, and prospects for the operation of the Integral System of Truth, Justice, Reparation and Non-Repetition. They affirmed that the communities’ distrust of the State is growing and that the territories are undergoing processes of militarization, with the threat of the reactivation of networks of informants and the rearmament of the population.

The leader of the German delegation, Dr. Jan-Marco Luczak, expressed the difficulty of grasping this situation and confronted the activists about the doubts generated by the political will of the Colombian government to put an end to criminality and protect the lives of leaders. The response to this concern was concretely exemplified: despite decrees, specialized government units, and protocols, there have been few meetings of the security commission to dismantle paramilitarism; investigations remain in the local prosecutors’ offices, and there are very few central government declarations on how to put an end to the assassination of social leaders. 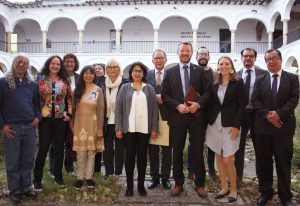 The Bundestag Andean delegation’s visit to Colombia included meetings with representatives of the Government, Congress, and international organizations, and knowledge of reintegration initiatives for former combatants.

During the talks held at CAPAZ, the German delegation highlighted some peace initiatives and projects that they learned about in Colombia or about which they had already been informed before their trip to Colombia. In any case, they stated that the representatives of President Ivan Duque’s government with whom they held meetings assured them that it is not the government’s intention to reduce the peace budget.

Two petitions were received by the deputies at the end of the meeting held at CAPAZ. On the one hand, the group of social representatives emphasized the need for international cooperation to remain in Colombia. Diana Aristizábal, representative for the Prodepaz Network indicated that this network has been working with the German cooperation agency GIZ for a long time, and highlighted the contribution of international cooperation in terms of protecting the lives of social leaders.