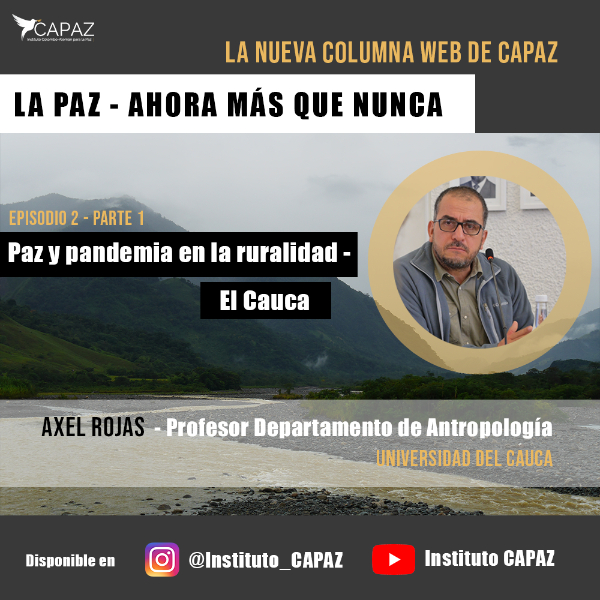 CAPAZ has published its second episode of “Peace, now more than ever”, the web video column produced by the Institute and streamed on its social networks every Tuesday. The online video-column deals with the implementation of peace in Colombia in times of the COVID-19 crisis.

This second episode is called “Peace, pandemic, and rurality”, and it will be on our social networks –Instagram and YouTube— as from April 28, 2020.

Axel Rojas, professor at the Department of Anthropology at Universidad del Cauca, will talk about his observations on the current situation of the ethnic and peasant communities, as well as the productive and economic dynamics in the department of Cauca, in southwestern Colombia.

The first part will be released this Tuesday, April 28, 2020 and will present a overview of the effects of the crisis on the social and political dynamics of armed conflicts in El Cauca. Some of these conflicts are historic and have been exacerbated by the crisis over COVID-19.

The second and final part will deal with the problems of the productive sector and the economies (licit and illicit), as well as the measures taken by the State, the local guards, and the armed actors themselves, to maintain control in the region. It will be released on Tuesday, May 5, 2020, also on the CAPAZ social networks.

The first episode presented the observations of Prof. Dr. Stefan Peters, CAPAZ Director and Professor at Justus Liebig University Giessen, on the stocktaking of peace implementation before and after the pandemic, and the role of international cooperation in these scenarios.

There is no excuse not to follow the CAPAZ web video-column about peace in times of COVID-19: all the episodes are available on our YouTube channel.