Persistence of community links and the construction of processes of memory and peace. The Quinchía case in the Risaralda department Copy 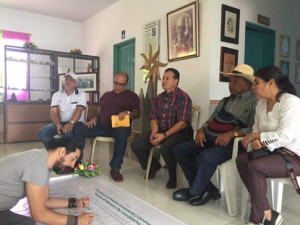 Reviewing the historical background of Quinchía, there appear to be various cycles of violence and some experiences of community resistance. Among the former, we have the formation of peasant self-defence groups established at the end of the 1950s. Among the latter, we have, in the 1970s, the significant emergence of the promotion committees of the National Association of Farmer Users (ANUC).

Between 2002 and 2004 –a period that coincides with the most critical moments of the war in Colombia-, more than 120 people were assassinated in this locality including important regional leaders.

The project is aimed at understanding  the fact that, despite this dyad of violence and resistance, in Quinchía there are persistent and strong networks of well-being, conceived outside or beyond state logics, and the fact that they remain valid in the narratives of its people, in their relationship with nature, in their perception of political organisation, and in their cultural practices. Based on collaborative work methodologies, the purpose of the project is to facilitate the activation of symbolic initiatives that render visible the historical role of Quinchía in peacebuilding in Colombia.

Persistence of community links and the construction of processes of memory and peace. The Quinchía case in the Risaralda department