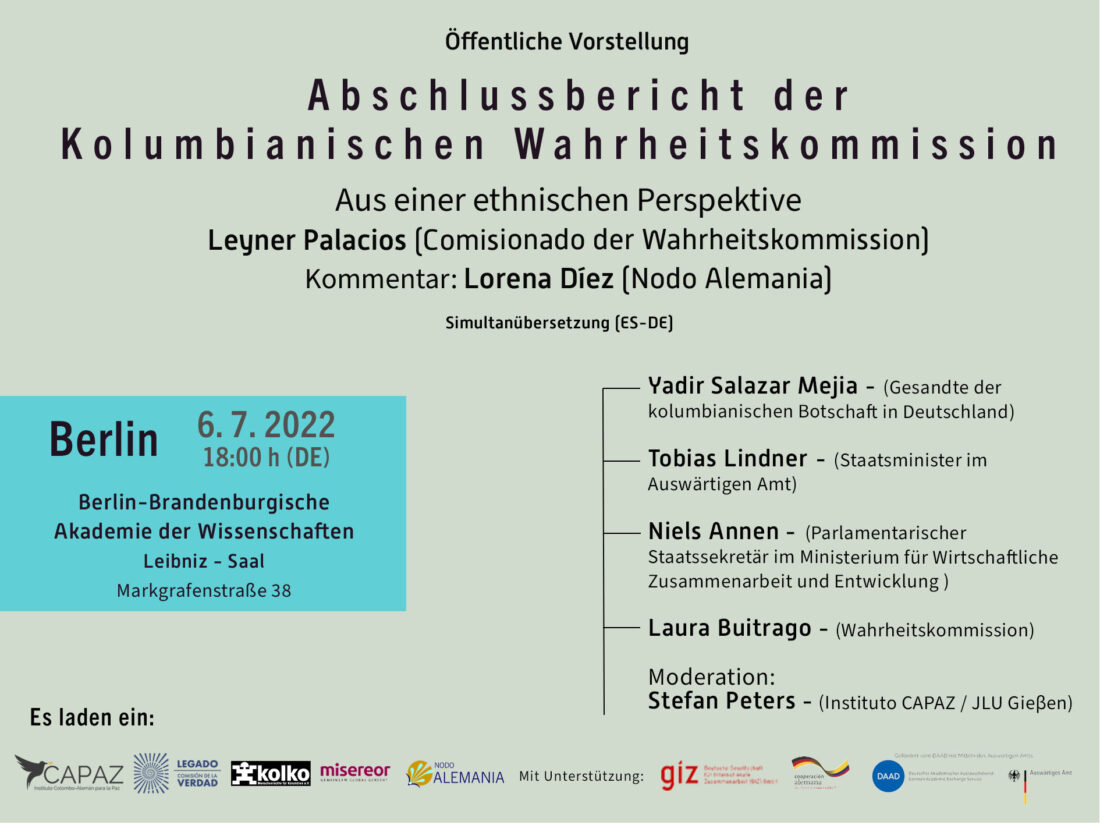 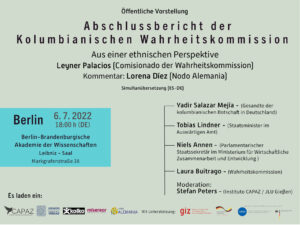 On July 6, will be held in Berlin (Germany) the presentation of the Final Report of the Commission for the Clarification of Truth, Coexistence and Non-Repetition (CEV) of Colombia. The German-Colombian Peace Institute, the German Agency for International Cooperation (GIZ), the Nodo Alemania, Kolko and Misereor have joined forces to support the CEV to this end. This is a public event open to people interested in the results of the CEV’s work. Simultaneous translation (Spanish-German) will be provided at the event.

The report will present what happened during more than 50 years of armed conflict in Colombia and reveal the patterns of violence that occurred during that period. Based on the accounts of more than 20,000 people who provided their testimonies, the report will give voice to victims, members of the security forces, former combatants, businessmen and other civil society actors involved in the conflict. This document will contribute to the clarification of the truth, one of the basic pillars of the Final Agreement for the termination of the conflict and the construction of a stable and lasting peace, signed in November 2016 between the Government of Colombia and the former Revolutionary Armed Forces of Colombia (FARC-EP). It will also include recommendations for the non-repetition of a violent past that generated mistrust and desolation.

The presentation on July 6 will take place at the Berlin-Brandenburgische Akademie der Wissenschaften (Leibiniz Hall) at 6:00 p.m. (German time).  The event will be attended by Truth Commissioner Leyner Palacios, who will discuss the impacts of the armed conflict on Colombia’s ethnic groups. Additionally, Lorena Diez, member of the Nodo Alemania, will comment on the report from the perspective of exile. Opening remarks will be made by the Alternate Ambassador of Colombia in Germany, Yadir Salazar Mejía, the Deputy Federal Minister of Foreign Affairs (AA), Mr. Tobias Lindner, the German Deputy Federal Minister for Economic Cooperation and Development (BMZ), Mr. Niels Annen, and the CEV official, Laura Buitrago. The event will be moderated by Prof. Dr. Stefan Peters, Academic Director of the CAPAZ Institute.

The report will be officially presented on June 28 in Colombia and subsequently disseminated in different regions of the country and the world with the support of civil society, academia and various international organizations. Some of the topics addressed by the report are: historical narrative of the conflict; violations of human rights and international humanitarian law; violence against women and LGBTQ+ population; impact of the armed conflict on ethnic groups; effects on children and adolescents; social fractures and mechanisms implemented by local communities to overcome violence; and exile and territorial dynamics of the conflict in different regions of Colombia.

Understanding the Final Report of the Truth Commission:

Understanding the Final Report of the Truth Commission: