On March 14, 2019, the CAPAZ Academic Director, Prof. Dr. Stefan Peters was invited to Universidad de Ibagué to present his talk entitled “The peace process in Colombia and the challenges of social inequalities”. The audience included researchers and students from the educational community.

Based on the current context of the peace process and implementation of the Final Agreement, Dr. Peters focused on reviewing the advances made in said implementation and stable and sustainable peacebuilding from a perspective based within social inequalities.

Latin America and Colombia, in particular, are some of the most unequal regions in the world. From a theoretical approach to the concept, Dr. Peters recognised that social inequalities are presents not only in terms of social class but also in terms of intersectionality; that is, we are subject to socio-territorial, gender, and ethnic inequalities.

Without losing sight of the intersectional approach, Dr. Peters developed the social inequalities-peacebuilding relationship within the context of transitional justice. He highlighted Colombia and its Comprehensive System of Truth, Justice, Reparation and Non-repetition (SIVJRNR) as an exemplary case.

However, according to Peters, there are numerous challenges that the institutions involved in the system have to deal with; for example, in terms of access to the institutions, the construction of social relations based on their work, and the implementation of reparations.

The second topic of the talk referred to the memory related to social inequalities. Peters highlighted the high-level of production in Colombia of works and documentaries on memory. The issue worked on focused on this memory that is not necessarily active and does not always do justice to the voices of some of the victims.

The researcher therefore referred to these (Non-)Memories as “memories that exist, but whose articulations and actors are characterised by the lack or scarcity of presence in public spaces, their little visibility and their insufficient capacity to make themselves heard”. 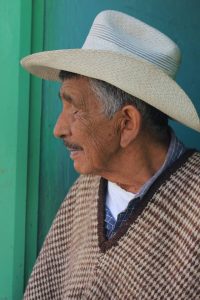 You may be interested in: exploratory study on audio-visual memory coordinated by researcher Carolina Patiño from Universidad de Ibagué

He reviewed some of the aspects of the implementation of peace in which there is evidence of social inequality. Based on the first issue in the Final Agreement (on comprehensive rural reform), he indicated the way in which inequalities in access to land in Colombia can, for example, delay the (effective) implementation of the agreements.

In his conclusions, Stefan Peters highlighted aspects of the Final Agreement that will lead to stable and lasting peace, without leaving aside the possibility of being criticized. Social inequalities hamper the successful implementation of peace, which is why they have to be reduced. They do not necessarily have to be eliminated (no society is without them), but rather it is important to emphasise existing extreme inequalities.

Click here to see Prof. Dr. Stefan Peters’ talk given at Universidad de Ibagué (March 14, 2019): “The peace process in Colombia and the challenges of social inequalities” (in Spanish)