The German Association of the United Nations in dialogue with CAPAZ

The German Association of the United Nations in dialogue with CAPAZ 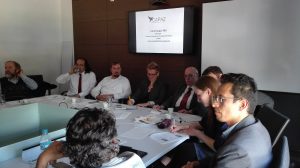 On August 31st, 2017 the Institute CAPAZ welcomed a delegation consisting of 14 participants of an academic trip organized by the German Association of the UN. The delegation consisted of students, public policy consultants, former civil servants and international cooperation officials as well as journalists. The vice-president of the Association and head of the delegation, Ekkehard Griep ,was glad about the creation of CAPAZ and highlighted its interdisciplinary approach. Further, the meeting was attended by researchers from Colombian universities such as the „Universidad Nacional de Colombia“, the „Universidad del Rosario“ and the „Universidad Externado de Colombia“, who are all members of the Colombian consortium of CAPAZ. They all shared their visions on the challenges posed by the implementation of the peace agreement subscribed by the Colombian Government and the FARC. Discussed topics included amongst others: the reconfiguration of the political participation of social groups to strengthen ownership, the incidence of the German international cooperation in the field of education, the impact of the peace process in the new territorial order and the role of consultant institutions (think tanks) in advising the Colombian government on the implementation of peace and conflict public policies. 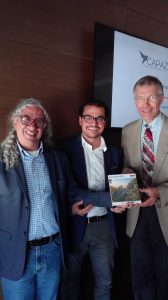 The Institute CAPAZ was represented by Professor Camilo Borrero, academic coordinator of the Colombian consortium, as well as the manager of the Institute, Dr. Carlos Nupia, who presented the objectives of CAPAZ and explained the activities the institute  realized during the first months of its operation, such as the settlement of the institute’s office in Colombia, the establishment of a networking platform in the field of peace studies for German and Colombian researchers, the funding of explorative projects with a practical projection to society and the support of the Summer Schools in Colombia and Germany.

The meeting ended with a reflection about the role of the rule of law in the democracy consolidation of countries facing post-conflict environments and the necessity of implementing bottom-up research approaches to capture the reality of people who live in territories affected by internal conflicts in the most appropriate way.

Organizing this kind of activities, the Institute CAPAZ seeks to strengthen its relation with the civil society in Colombia and Germany, since it will enhance the  communication between the researchers of its partner universities and the people publicly interested in the peace process in Colombia.