The German-Colombian Peace Institute – CAPAZ is strengthening its presence in a number of Colombian regions in order to organise, with its counterparties, spaces that facilitate the projection and visibilisation of the academic and practical work carried out in these regions on the subject of peace.

We are pleased to share the impressions regarding the academic sessions in these cities, whose shared thematic axis involved some aspects of transitional justice revised from the regions. 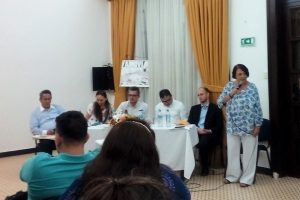 Professor Yvonne Suárez (on the right) explained the work of AMOVI. / Photo: AMOVI

On November 6 and 7, 2018, Universidad Industrial de Santander (UIS), supported by the Victims’ Oral Memory Archive (AMOVI) and the Heinrich Böll Foundation in Colombia, hosted the International CAPAZ Conference entitled: “Memory, reconciliation, and peacebuilding in the territories: Santander in dialogue with Colombia”.

The event brought together researchers and representatives from civil society organizations in the country’s different regions (Caribbean coast, the Southern Pacífico, Magdalena Medio, Norte de Santander, and Catatumbo, among others) around two main axes:  the role of memory in reconciliation and the importance of aspects related to the environment in territorial peace.

The voices present also considered the interests of the indigenous populations grouped within the National Indigenous Organization of Colombia (ONIC) and the Major Government of the Traditional Indigenous Authorities of Colombia (Gobierno Mayor); those of the Afro-Colombian communities that take part in the Black Communities Process in Colombia (PCN); and long-standing peasant associations such as the Valle del Río Peasant Association (Cimitarra).

You can watch: CAPAZ Conference at UIS (Informativo UIS, in Spanish)

The International Conference also offered the possibility for participants to discuss the work of two of the transitional justice instruments: the Truth Commission (CEV) and the Special Jurisdiction for Peace (JEP). They also discussed the possible contributions that civil society organizations can make based on their research, the gender approaches contained in their mandate, and the scope and limitations of the CEV in the current political context. 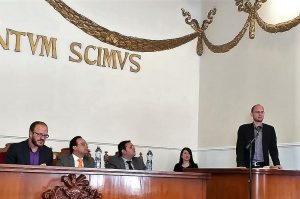 Diversity in the CAPAZ International Conference in Pasto

The Universidad de Nariño in Pasto served as the venue for the CAPAZ International Conference “Transitional Justice and Territorial Peace: Perspectives from South-western Colombia” on November 15 and 16, 2018.

From different thematic approaches and perspectives (ethnic, territorial, international, and cultural), expert speakers analysed the problems and challenges of peacebuilding in some of the departments in south-western Colombia such as Cauca and Nariño.

The academic review was complemented by perspectives and criticisms set out by representatives of the indigenous communities that inhabit the region such as the Awá e Inga, and from the grassroots social processes such as the Asociación de Mujeres Cacaoteras and the Afro-Colombian communities.

The sessions in Pasto, Nariño, gave participants a chance to hear about, reflect on, understand, and discuss the specific dynamics and challenges of territorial peace in south-western Colombia. These problems are not only related to the current conjunctural moment, but also to structural factors such as inequality, social injustice, and the region’s economic development model. 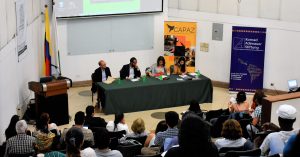 The CAPAZ international conference in Medellín “The Rights of the Victims in Transitional Justice”, which took place on November 20, 2018, set out an agenda focusing on the analysis of expectations, realities, and challenges implied by the satisfaction of the rights of the victims of the conflict. The Conference was organized with the support of Konrad Adenauer Stiftung Rule of Law Programme.

This analysis was carried out based on the Comprehensive System of Truth, Justice, Reparation and Non-repetition, and on the points and mechanisms set out in the Final Agreement between the government and the demobilised FARC guerrilla.

The analysis also included an examination of crucial topics related to the rights of the victims from a gender approach and a territorial approach, which allowed an identification of the victims’ current unconformities and concerns, and a recognition that we have a long path ahead of us in terms of challenging the structural causes of gender-based violence and impunity.

You may be interested: El Gobierno no les ha cumplido a las víctimas (UdeA Noticias, in Spanish)

From a critical perspective, the discussions reviewed shortcomings, gaps, and advances in the experiences of transitional justice with respect to the victims, not just in Colombia with the Justice and Peace Law, but also in countries like Argentina and Peru.

A diverse audience took part in the session at Universidad de Antioquia:  students, professors, intellectuals, and even direct victims of the conflict. On the one hand, the victims present were able to express their frustrations with respect to what has been offered so far by the institutions. On the other, in the academic session, they found a space in which they could understand the possibilities in terms of the victims’ rights set out in the Final Agreement, in aspects that are still pending implementation.

CAPAZ wishes to thank those who attended the conference, the speakers, and institutions and people that supported the organisation of the events:

In Medellín: Universidad de Antioquia (School of law and political science and the Office of international relations).