This section shows our latest publications in the four categories newsletter/SIE, policy brief, working papers and worth readings
20. January 2020 In milestones, news, Others, Publications, Working Papers 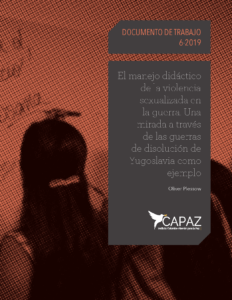 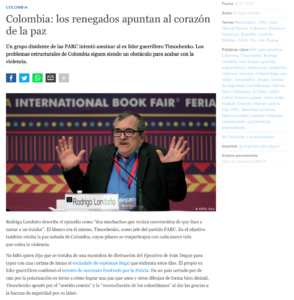 “Colombia’s structural problems continue to be an obstacle to ending the violence”. This forceful sentence introduces the article published on January 15, 2020 by the German news network, Deutsche Welle (DW) for its Spanish-language news services.

Both experts referred to the complex situation that is currently playing out in the implementation of the Colombian peace process. The killing of social leaders in the short time since the beginning of 2020; new illegal interceptions by the Colombian army and what seems to have been an attack by FARC-EP dissidents on their former leader and now a member of the FARC party, Rodrigo Londoño, do not seem to paint an encouraging picture, according to the publication: “the reality is that post-agreement Colombia has turned out to be a much bloodier place than many expected”.

“The peace agreement brought the conflict with the FARC to an end, but it did not manage to eliminate many of the fundamental drivers of the violence”, stresses political scientist Angelika Rettberg, while CAPAZ Academic Director, Stefan Peters emphasises: “It is the government’s obligation to protect its citizens”.

Contribution to the second edition of a volume on psychosomatic medicine: A CAPAZ-supported project 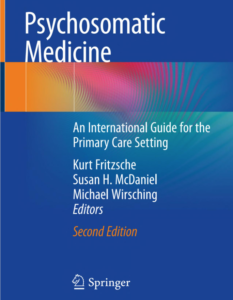 Cover of the Second Edition (Springer)

Researchers Sonia Díaz Monsalve and Andrés Cubillos collaborated on a chapter on psychosomatic medicine in Latin America, included in the second edition of the publication entitled “Psychosomatic Medicine: An International Guide for the Primary Care Setting” (Springer Nature, 2020). One of the editors for the volume is Prof. Dr. Michael Wirsching, from the University Medical Centre Freiburg (Klinik für Psychosomatische Medizin und Psychotherapie) at the University of Freiburg. Dr. Wirsching is a spokesman for the university at CAPAZ.

The researchers coordinated the project on mental health in vulnerable populations in Colombia, supported by CAPAZ and other funding bodies.

Of interest about the project: “Improvement of the mental health of populations displaced to Colombia’s urban areas”

About the second edition (in English. Source: Springer)

“Now in its fully revised and expanded second edition, this volume is the definitive global resource on psychosocial problems. Containing several new chapters and featuring extensively updated contributions from experts in the field, this title takes a uniquely global approach in laying the foundations of bio psychosocial basic care and provides relevant information about the most common mental and psychosomatic problems and disorders. An extension of the cultural aspects of the individual clinical pictures and new contributions from China, Latin America, Russia, Iran, India, Africa and Myanmar, also about migration and mental health accompany this revision.”

More information about the publication (in English) 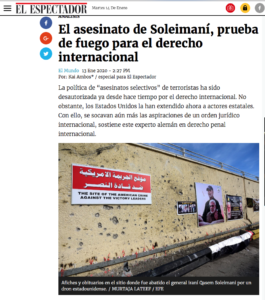 The jurist Prof. Dr. Kai Ambos, Director of the Centre for the Study of Latin American Criminal Law and Criminal Procedure (CEDPAL) at the University of Göttingen and spokesman for the university at CAPAZ, analysed the case of the assassination of the Iranian General Qasem Soleimaní for the Colombian newspaper El Espectador.

The introduction to Prof. Dr. Ambos’ article reads as follows: “The ‘target killings’ of terrorists has long been disallowed by international law. However, the United States has now extended it to state actors. This further undermines the aspirations of an international legal order, argues this German expert in international criminal law”. 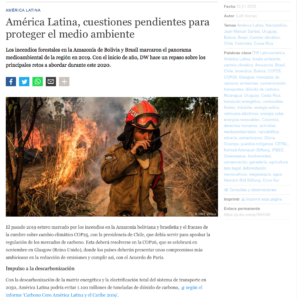 Prof. Dr. Peters, who is also professor of peace studies at Justus Liebig University Giessen, spoke specifically about the protection of activists and social leaders in Colombia who defend the environment and the implementation of the peace agreements signed in 2016.

Click below to read full article published by DW on the environmental and social challenges in the Latin American region.

0
17. December 2019 In milestones, news, Others, Publications, Worth Reading 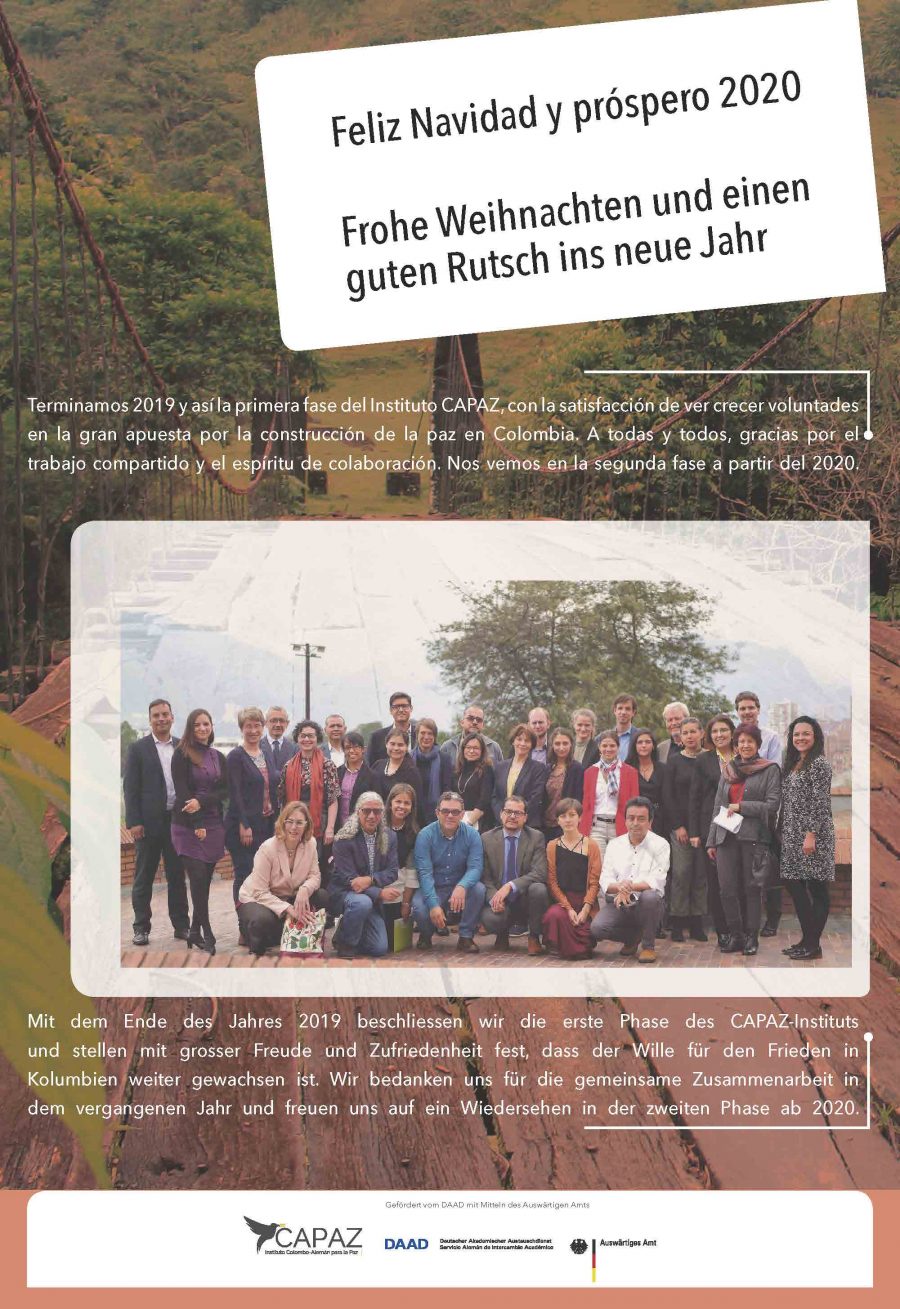 Sara Vélez Zapata, a graduate of the Master’s in Interdisciplinary Studies on Development (Cider) at Universidad de los Andes, and a former scholar at the CAPAZ 2017 Winter School is the author of Cider Policy Paper No. 10, published in November 2019.

The article entitled “Paz desde lo local. La fase veredal del PDET en El Bagre: voz sin decisión” (Peace based within the Local. The rural phase of the PDET in El Bagre: A voice without decision) directed by Professor Mauricio Uribe López is the result of a Master’s degree research project in Interdisciplinary Studies on the Development of Cider (Universidad de los Andes).

The research project was financed by the author herself and involved community leaders from El Bagre, a municipality in the department of Antioquia, and local officials from the Territorial Renewal Agency (ART).

This article analyses the formulation process of the Development Programmes with Territorial Approach (PDET), from the critical perspective of the local turn in peacebuilding and provides empirical evidence about the role of the community actors in the implementation process of the Colombian peace agreement. The analysis is framed within the national and international academic literature on peacebuilding that seeks to highlight the importance of community participation in processes and initiatives that aim to build shared futures in which violence is not the protagonist. The research question is: which conditions explain the participation level during the formulation of the PDET in its rural phase in El Bagre (Antioquia)? A case study is carried out using a process tracing methodology, thus arguing that the Community Pact for Regional Transformation corresponds to a participatory process of tokenism (voice without decision).

Cover of the magazine in homage to Alfredo Molano Bravo

The German-Colombian Peace Institute – CAPAZ is pleased to present is pleased the magazine in homage to Alfredo Molano Bravo (1944-2019), Colombian historian, sociologist and journalist.

The magazine is a publication by Arcadia, in collaboration with the CAPAZ Institute, the Foundation for Freedom of Press (FLiP), the League against Silence, Friedrich-Ebert-Stiftung in Colombia (FESCOL), the Universidad de Antioquia, and Penguin Random House Editorial Group.

“El hombre que sabía escuchar” (The man who knew how to listen) is a special issue that brings together texts by Alfredo Molano Bravo himself, his son Alfredo Molano Jimeno (journalist and historian) and Rodrigo Pardo (editorial director of Semana magazine). The latter acknowledges three facets of Alfredo Molano Bravo in the publication: “in the extensive work of Molano, three authors can be identified – the historian, the sociologist and the journalist”.  But even more important is Pardo’s recognition of his legacy: “Molano was always fascinated by the history of the ‘other’ country: the countryside, the peasants and, inevitably, the violence”.

In this tribute, Jeanneth Valdivieso (League against Silence) presents the testimony of peasant leader Marcela Rosero, who met Alfredo Molano and worked with him in 2018 in the south of the department of Cauca. Rosero refers to Molano as an accomplice, interested in knowing deeply and following closely what is really happening in the rural areas of this department. “The mountain is seen as something idyllic, but people don’t know about the conflicts experienced there. Alfredo wrote about these conflicts”. She says that there has not been anyone more committed to the peasantry and to telling their stories and realities – the real ones – than the late Molano.

Commissioner Marta Ruiz reports on his work in the Commission for the Clarification of the Truth (CEV). She highlights two aspects of Molano’s work from the CEV: his ability to listen and his vision of the true meaning of the Commission’s work. “We learned from him that listening is the first act of giving meaning to the other”. She goes on: “Alfredo feared that the siren songs of political correctness, of intellectual vanity or of contemporisation with power would divert the Commission on this unique journey towards a story that does justice and repairs the pain experienced in Colombia”.

Finally, the contributions of journalists, teachers, and editors such as Ginna Morelo, Mario Jursich, and Patricia Nieto make this publication an intimate and historical testimony of someone who was Colombia’s eternal journeyman. To Alfredo Molano Bravo, thank you. To you the reader, we highly recommend this book.