CAPAZ Policy Brief 3-2020: Situation of social leaders and human rights defenders in Colombia in 2019 and their prospects for 2020

CAPAZ Policy Brief 3-2020: Situation of social leaders and human rights defenders in Colombia in 2019 and their prospects for 2020 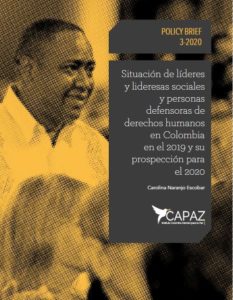 This is how she introduces the text:

“Despite having lost thirty-two family members, Leyner Palacios, a leader and survivor of the Bojayá (Chocó) massacre, has not stopped working for the rights of his community. Because of his tireless work, he is one of the visible faces of the complaints about the presence of more than one hundred men from the ELN (National Liberation Army) and six hundred paramilitaries in that municipality (…). In a country with high levels of inequality and unequal presence of the State throughout its territory, the Final Agreement for the End of the Conflict and the Construction of a Stable and Lasting Peace signed in 2016 with the FARC-EP (Revolutionary Armed Forces of Colombia – People’s Army) raised hope for change. In many cases like Leyner’s, who was one of the victims invited to Havana, the peace agreement was an opportunity to ensure the effective enjoyment of the rights of his community, stricken by violence and poverty. There have been thousands of voices of social leaders, human rights defenders who have spoken out from their territories, from the rural areas, on their communities’ agendas. It is clear that state building from the local level, and with the arrival of the plans of entities responsible for the effective enjoyment of rights, requires joint work with social leaders who know their regions, as they have been working for years for the rights of their communities and enjoy the recognition necessary to build trust”.

Carolina Naranjo Escobar. International advisor on peacebuilding, human rights and reconciliation. She holds an M.A. in Conflict Resolution and Peace Studies from the University of Bradford, England.