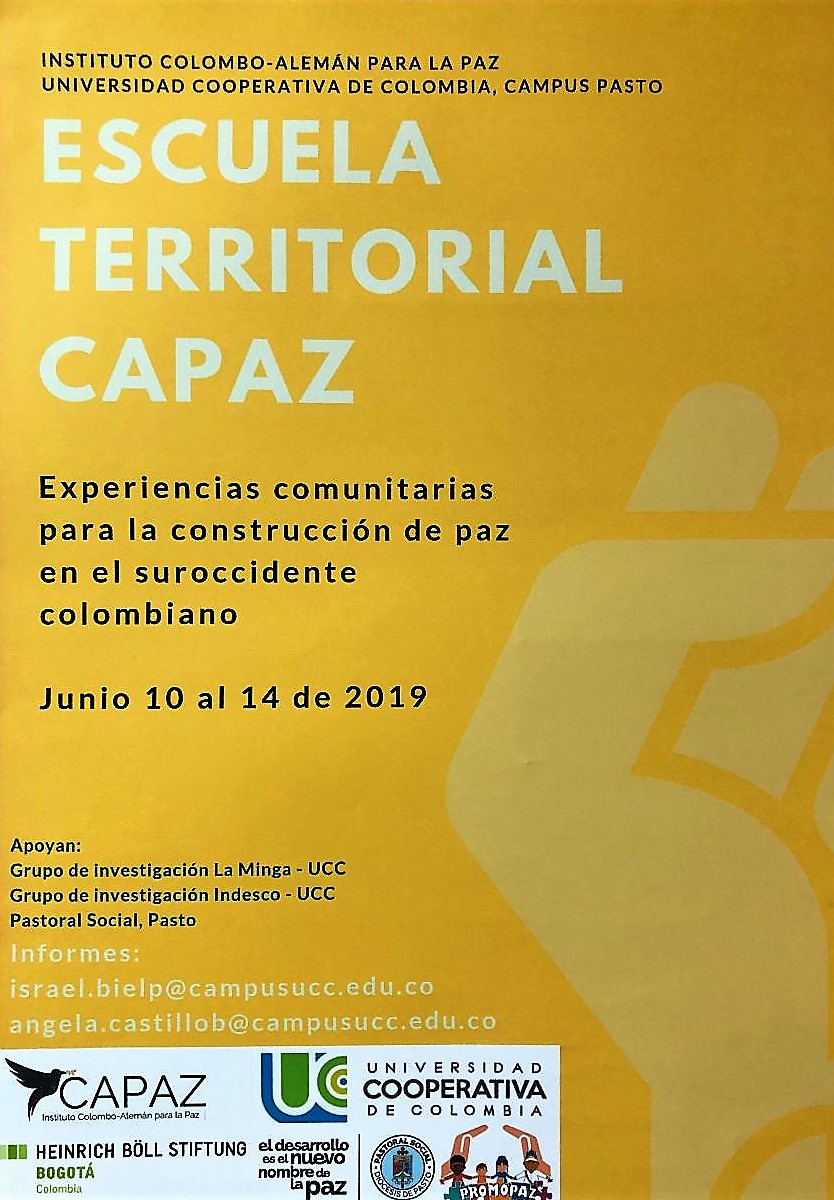 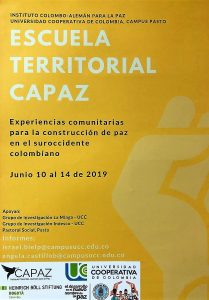 The CAPAZ Territorial School took place from June 10 to 14, 2019 in Pasto, Nariño and was coordinated by the German Colombian Peace Institute – CAPAZ, Universidad Cooperativa de Colombia – Pasto Campus, Pastoral Social in Pasto, and the Heinrich Böll Foundation in Colombia.

The school was conceived as a training exercise and second phase of the CAPAZ-supported exploratory study led by research groups: La Minga and Indesco, attached to Universidad Cooperativa de Colombia based in Pasto.

The researcher and director of the CAPAZ Territorial School, Israel Biel reported on the findings of that initial investigation, which highlighted, among other things, the absence of the State precisely in the most vulnerable and complex territories in Nariño. “We therefore proposed a second phase of the research project that consisted of creating this territorial school taking into account that, if institutions and peace building mechanisms were going to be absent in these more conflictive areas, we had to bring the social actors (…) here to the university”, stated Biel.

Ángela Castillo, researcher and teacher at the school told us, “In the study, we wanted to explore what the people expected when ex-combatants arrived in Tumaco. We conducted this study and, based on the results, decided that we had to continue to advocate on these issues”.

You may also like (article in Spanish): “Community experiences for peacebuilding in southwestern Colombia” 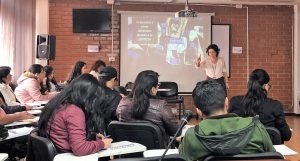 In order to strengthen the capacities of local actors through education, the school convened a group of 25 participants made up of social leaders, human rights defenders, ex-combatants, and students. For Adolfo López, social leader of the Nariño region and student at the school, “it is important for there to be trained leaders who will show society and the country what is happening in our region”.

Based on the findings, the school curriculum was designed based on the following thematic axes: human rights, political participation, socio-economic alternatives for development, truth and justice, and construction of the social fabric.

Read the programme of the Escuela Territorial CAPAZ (in Spanish).

The teaching staff was made up of researchers from the Universidad Cooperativa de Colombia – Pasto Campus, Pastoral Social in Pasto, and the regional branch of the Commission for the Clarification of Truth, Coexistence and Non-Repetition.

The school’s academic agenda was complemented by cultural events. Concerts and a play on forgiveness and reconciliation promoted the integration and exchange of knowledge and experiences through art.

Once the workshops had been completed, the students highlighted the organization of the school, the high standard of the teaching staff, and the relevance of the topics addressed. Of special importance was meeting each other and the possibility of expressing concerns in an academic space different from the territory itself. As put by Martha Zapata, ex-combatant and a student at the school: “I learned how to replicate what I learned in each one of the communities as a contribution to the peace process”.

Here is the institutional video that brings together the experiences shared at the CAPAZ Territorial School, produced by the Universidad Cooperativa de Colombia – Pasto Campus (in Spanish).