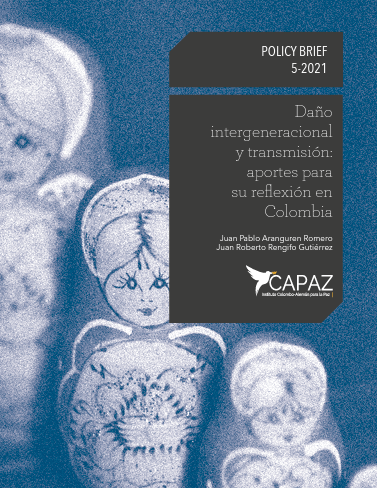 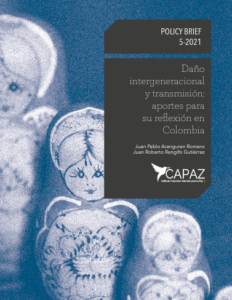 In the policy brief: “Intergenerational damage and transmission: contributions for reflection in Colombia”, researchers Juan Pablo Aranguren and Juan Roberto Rengifo provide “some elements of analysis through which to understand intergenerational damage and its associated concepts, in the contexts of conflict and transition to peace that Colombia is currently experiencing”. The document proposes “a critical discussion on trauma as a “universal” category that explains human suffering and its forms of intergenerational transmission”.

The CAPAZ policy briefs series is intended to provide visibility to proposals and recommendations formulated by researchers on specific issues related to peacebuilding in Colombia, according to the results of their work. This series provides tools for understanding and addressing specific problems faced by societies in transition. The new policy brief on intergenerational harm is part of the CAPAZ Línea Azul series of publications, which includes academic works related to the Integral System of Truth, Justice, Reparation and Non-Repetition (SIVJRNR).

Based on the recognition of the genesis and development of trauma as an analytical category, Aranguren and Rengifo argue that there is a need to situate this concept in historical and cultural terms; that is, in a specific context in order to understand its particular meaning. The same occurs, say the authors, with the idea of the transmission of trauma.

In the particular context of the Colombian armed conflict, and based on research carried out with Colombian victims abroad, the document recommends “to consider the relevance of the unsaid as a fundamental element of the intergenerational relationship”. This idea arises from the question of how second and third generations of victims of the conflict have experienced the intergenerational transmission of traumatic events.

To learn more about the full analysis and other recommendations from the authors, access Policy Brief PB5-2021 Línea Azul (.pdf, in Spanish)

Juan Pablo Aranguren Romero: Associate Professor of the Department of Psychology at Universidad de los Andes, Colombia. He has been directing the study “The ethics of listening” since 2014, in which he analyzes the modes of relationship that people establish with the experiences of pain and suffering caused by war and political violence. Author of the books Cuerpos al límite: tortura, subjetividad y memoria en Colombia (Bogotá: Ediciones Uniandes, 2016) and Managing Testimony and Administrating Victims (New York: Palgrave, 2017), among other titles. Contact: jp.aranguren@uniandes.edu.co

Juan Roberto Rengifo Gutiérrez: BA in Psychology and Anthropology from Universidad de los Andes, Colombia, and MA in Social Anthropology from the School of Social Sciences of Latin America (Flacso), Argentina. He is currently a PhD Psychology student at Universidad de los Andes where his research focuses on the forms of transmission and intergenerational circulation of damages caused by political violence in black communities in Buenaventura, Colombia.