The first conference organised by the German-Colombian Peace Institute –CAPAZ in Colombia, supported by the German embassy revealed the complexity of the realities of peacebuilding in the country, as well as the enormous benefit of gathering together the academic community with a diverse public interested in an open and respectful debate on peace-related topics. 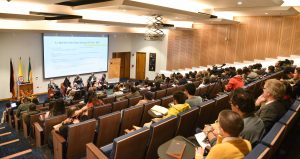 The International CAPAZ Conference: “Peacebuilding in Colombia: Balance and perspectives”, which took place on September 18 and 19, 2018 at Universidad Externado de Colombia cast light on these and other successes.

You may be interested in: The first CAPAZ International Conference on peacebuilding (in Spanish)

During the two-day event, experts analysed peacebuilding from different approaches and disciplines. Some described the work they carry out as part of state institutions or social organisations; others presented the main findings of several CAPAZ-funded studies, studies implemented by German and Colombian universities, and the work of communities.

The diversity of the academic program attracted an equally diverse public. Students, researchers, civil society and government representatives, members of the public forces, foreigners, and actors affected direct or indirectly by the armed conflict met here to discuss their ideas in the sessions proposed.

Academic and institutional cooperation between Colombia and Germany 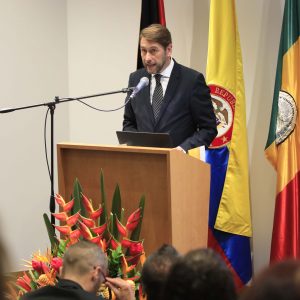 The Conference provided an opportunity to reiterate the cooperation links between Colombia and Germany. Through his participation, German ambassador in Colombia, Dr. Peter Ptassek, made a fundamental gesture of support to the Institution’s current and future work.

We recommend: “It is in our interest that the implementation of the Peace Accord is fulfilled”: German ambassador (in Spanish)

We also highlight the attendance and participation of the transnational cooperation project coordinator for the German Academic Exchange Service (DAAD), Dr. Stephan Geifes, who visited Colombia for the first time on occasion of the Conference. DAAD funds the CAPAZ Institute with resources from the German Federal Foreign Office.

An article of interest published in the DAAD Aktuell magazine (in German): Den Friedensprozess in Kolumbien unterstützen (Supporting the peace process in Colombia)

The Chancellor of Universidad Externado de Colombia and host, Dr. Juan Carlos Henao; together with the Chancellor of Justus Liebig University Giessen, Prof. Dr. Joybrato Mukherjee, who sent his regards from Germany, showed the willingness of the consortium’s founding universities to strengthen interinstitutional work through CAPAZ. 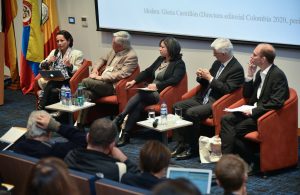 Roundtable with representatives of the institutions created based on the Final Agreement. / Photo: Luis Enrique Sierra/CAPAZ

The first sessions were dedicated to a detailed review of the institutions created based on the Final Agreement signed by the Colombian government and the FARC-EP guerrilla. The initial roundtable included Luz Marina Monzón, Director of the Search Unit for Missing Persons in Colombia (UBPD); Dr. Rodolfo Arango, a judge for the Special Jurisdiction for Peace (JEP); Saúl Franco, commissioner for the Truth Commission (CEV), and the CAPAZ academic director, Prof. Dr. Stefan Peters. The debate was moderated by Gloria Castrillón, editor of Colombia 2020, part of the Colombian newspaper El Espectador.

You may be interested in: “We will show that the killing of social leaders has nothing to do with ‘women problems'”: Commissioner for Truth (in Spanish)

In both sections, the participants described the structure, purposes, scope and challenges of the institutions they represent. A number of conclusions were reached following the presentations and public discussion.

The decentralisation of the entities is essential in allowing the communities –in particular those that inhabit areas affected by the armed conflict- to access them and thus generate greater trust and credibility. 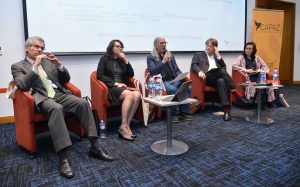 Four complementary perspectives on the JEP were presented at the CAPAZ Conference. / Photo: Luis Enrique Sierra/CAPAZ

Recommended reading: Kai Ambos’ criticism to the changes proposed by uribismo to the transitional justice (in Spanish)

Another priority is to focus the work of these entities on the needs of the victims. Public participation is fundamental in the search for missing persons, the application of the law to punish those held most responsible, and processes of truth and memory. The entities and society must listen to each other and show solidarity, while they lay aside fear and polarisation.

Finally, one of the main challenges of the institutions is to move away from isolated work and strengthen interinstitutional cooperation in order to replace the fragmented vision of the conflict with a joint perspective.

Peace in contexts of inequality

Peacebuilding in Colombia is subject to structural and historical inequalities. This and other premises guided the session on peace and social inequality, which ended the first day of the CAPAZ Conference. 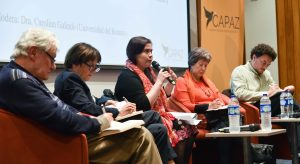 You may be interested in: “The victims know a State that supports their aggressors”: Marianne Braig (in Spanish)

Of the analysis presented and as a result of the public discussion, it was concluded that a reflection on the development of the conflict in conditions of inequality is not possible without bearing in mind, among other aspects, the macro and microeconomic circumstances of the territories; the inclusive and differential gender perspective, and the ethno-cultural particularities of the indigenous, Afro-descendant and peasant communities in some of Colombia’s regions.

The second day of the CAPAZ International Conference was marked by the presentation of cases, some of which were CAPAZ-supported exploratory studies.

Dr. Lozano presented the findings of her research on the funding of the postconflict. Her analysis accounted for the absence of a decentralised tax culture. Dr. Lozano also proposed a structural tax reform that responds to the real needs of the territories in Colombia.

Dr. Hernández referred to the treatment of the health sector in the Final Agreement. He appealed to the ancestral and bio centric notion of a healthy and peaceful life. Dr. Hernández insisted on the need to bridge the rural-urban gap in terms of health service provision, and promote the participation of the communities in the redefinition of the provision of such services. This is the only viable way in which to transform the health conditions in the territories (territorialities).

Flavio Bladimir Rodríguez’ research highlighted a number of structural land planning problems in Colombia. The exploratory study directed by Rodríguez proposes the eradication of “geographical illiteracy” by highlighting the tension between the State’s conception of the territories (disarticulated and elitist) and the latent conflicts within them. The proposal consists in building a better conception of the territories in which development has been unequal. 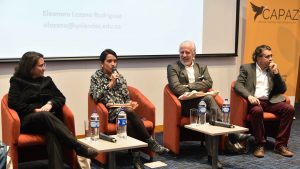 Issues relating to the Pacific and Colombia’s southwest

Ángela Castillo (Universidad Cooperativa de Colombia in Pasto, Nariño) presented a number of findings from the exploratory studies developed by researchers in German and Colombian universities in Colombia’s southwest. The result of the study is the first Policy Brief published by CAPAZ in August this year (published in Spanish).

Researcher Castillo described critical scenes in some of the municipalities in Colombia’s southwest in which the conflict has transformed rather than ceased. The little –or almost inexistent- political participation by the communities, the constant armed violence by some (new) actors and the increased number of illegal economies are extremely worrying.

Researchers Dr. Fabio Leyva and Dr. Iván Lizarazo (Universidad Nacional de Colombia) described the humanitarian problem in the Pacific region, which began in the 1980s and continues today. From the work carried out in the region in association with other universities, institutions and the community, the researchers revealed the need for the communities’ environmentally friendly and culturally respectful productive inclusion.

Based on his research, Luis Gabriel Salas (Universidad Nacional de Colombia) revealed how the municipality of Tumaco in Nariño has served and continues to serve as a corridor for illegal economies. He exposed the relationship between the use of power and the use of space and highlighted the importance of considering a territorial perspective in order to understand this highly economically lucrative relationship and how to deal with the latent dynamics of the armed conflict in this part of Colombia. 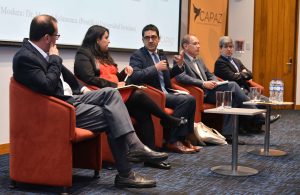 Panel on the situation in the Colombian Southwestern region. / Photo: Luis Enrique Sierra/CAPAZ

The Hidroituango case and extractivisms

As exposed by Dr. María Cecilia Roa (Universidad de los Andes); Isabel Zuleta (Movimiento Ríos Vivos Antioquia), and Axel Rojas (Universidad del Cauca), in a meeting moderated by Juan Mayr (National Conciliation Commission), the regional panorama for peacebuilding in Colombia has been permeated by the dispossession of indigenous land as in the case of the Risaralda department; megaprojects such as the Hidroituango reserve in the department of Antioquia; and extractivist activities, as in the case of the north of the Cauca department.

The three speakers focused on the importance of including the communities as participating actors in decision making related to the planning and application of works of infrastructure and resource extraction activities.

Historically, as today, indigenous, Afro-descendant, peasant and fishing communities have been subject to forced displacement, disappearance, violence, and land dispossession. Their voices claim, among other rights, to be taken into account and to make of their natural environment a subject of reparation.

As a consequence of the interests at stake and in the words of researcher Rojas, we must consider the different notions of territoriality: the agroindustrial, that of narcotraffic, mining, and hegemonic and subordinate territorialities, which are all currently in conflict. 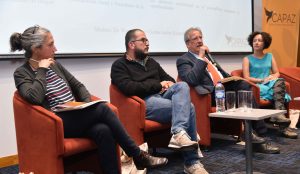 The defense of the territories, one of the statements during the panel on extractivisms. / Photo: Luis Enrique Sierra/CAPAZ

The last panel dealt with the construction of historic memory. Based on the sociocultural representations of the violence and conflict in film and television, researcher Dr. Mónika Contreras (Freie Universität Berlin/CAPAZ) and Dr. Sandra Carolina Patiño (Universidad de Ibagué) highlighted the importance of thematising these cultural constructions.

Both researchers set out the potential of the school environment as a scenario for the socialization of symbolic and historical memory through research projects carried out with students and based on the work of centres of historic memory.

Precisely in the field of symbolic construction, Prof. Dr. Annika Oettler and researcher Julian Reiter (Philipps-Universität Marburg) presented the results of their research carried out with youngsters in Bogotá, who worked specifically on the concepts of “victim” and “aggressor”.

Historian and professor at Universidad Industrial de Santander (UIS), Ivonne Suárez described the work carried out by the Archivo Oral de Memoria de las Víctimas, a project implemented by the researcher and her team within UIS.

Professor Suárez explained that the archive has been constructed together with the relatives of the victims and the community, and clarified that, as a sign of respect to the victims, access to the archive will be permitted only under certain circumstances, even if it is a historical archive available to the public. 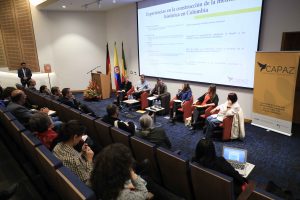 You may be interested in: AMOVI-UIS took part in the CAPAZ International Conference. Peacebuilding in Colombia: Balance and perspectives (in Spanish)

CAPAZ wishes to thank all the speakers for their lectures; Universidad Externado de Colombia for its logistics and administrative cooperation; and, of course, to those who attended the CAPAZ International Conference for their willingness to engage in dialogue and their active participation of each panel.

CAPAZ welcomes anyone interested in following and taking part in the free events scheduled in our Spotlight on Peace Calendar, which take place every fortnight at CAPAZ, Claustro de San Agustín, Bogotá, Colombia (Cra. 8 No. 7-21).

Our next appointment is a discussion on forced displacement on the Colombo-Panama border on Thursday, October 18 at 4:00 p.m.

The CAPAZ Spotlight on Peace Calendar began with a roundtable on the perspectives on the Final Agreement in the government of Iván Duque, followed by a panel on the situation of human rights defenders in Colombia.

For more information on the International Conference and the CAPAZ Spotlight on Peace Calendar contact us at: eventos@www.instituto-capaz.org

Other reviews from the first CAPAZ International Conference in Colombia (in Spanish):

Another perspective on peace in Colombia (Universidad Cooperativa de Colombia)