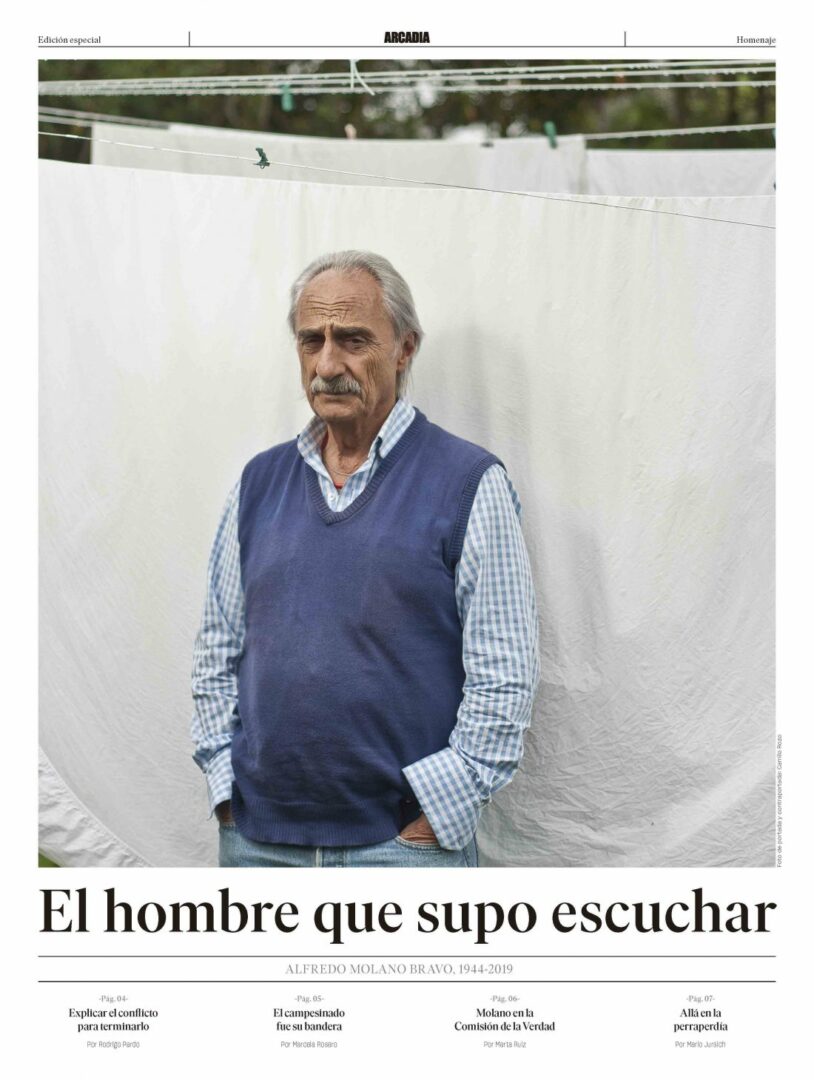 The German-Colombian Peace Institute – CAPAZ is pleased to present is pleased the magazine in homage to Alfredo Molano Bravo (1944-2019), Colombian historian, sociologist and journalist.

The magazine is a publication by Arcadia, in collaboration with the CAPAZ Institute, the Foundation for Freedom of Press (FLiP), the League against Silence, Friedrich-Ebert-Stiftung in Colombia (FESCOL), the Universidad de Antioquia, and Penguin Random House Editorial Group.

“El hombre que sabía escuchar” (The man who knew how to listen) is a special issue that brings together texts by Alfredo Molano Bravo himself, his son Alfredo Molano Jimeno (journalist and historian) and Rodrigo Pardo (editorial director of Semana magazine). The latter acknowledges three facets of Alfredo Molano Bravo in the publication: “in the extensive work of Molano, three authors can be identified – the historian, the sociologist and the journalist”.  But even more important is Pardo’s recognition of his legacy: “Molano was always fascinated by the history of the ‘other’ country: the countryside, the peasants and, inevitably, the violence”.

In this tribute, Jeanneth Valdivieso (League against Silence) presents the testimony of peasant leader Marcela Rosero, who met Alfredo Molano and worked with him in 2018 in the south of the department of Cauca. Rosero refers to Molano as an accomplice, interested in knowing deeply and following closely what is really happening in the rural areas of this department. “The mountain is seen as something idyllic, but people don’t know about the conflicts experienced there. Alfredo wrote about these conflicts”. She says that there has not been anyone more committed to the peasantry and to telling their stories and realities – the real ones – than the late Molano.

Commissioner Marta Ruiz reports on his work in the Commission for the Clarification of the Truth (CEV). She highlights two aspects of Molano’s work from the CEV: his ability to listen and his vision of the true meaning of the Commission’s work. “We learned from him that listening is the first act of giving meaning to the other”. She goes on: “Alfredo feared that the siren songs of political correctness, of intellectual vanity or of contemporisation with power would divert the Commission on this unique journey towards a story that does justice and repairs the pain experienced in Colombia”.

Finally, the contributions of journalists, teachers, and editors such as Ginna Morelo, Mario Jursich, and Patricia Nieto make this publication an intimate and historical testimony of someone who was Colombia’s eternal journeyman. To Alfredo Molano Bravo, thank you. To you the reader, we highly recommend this book.