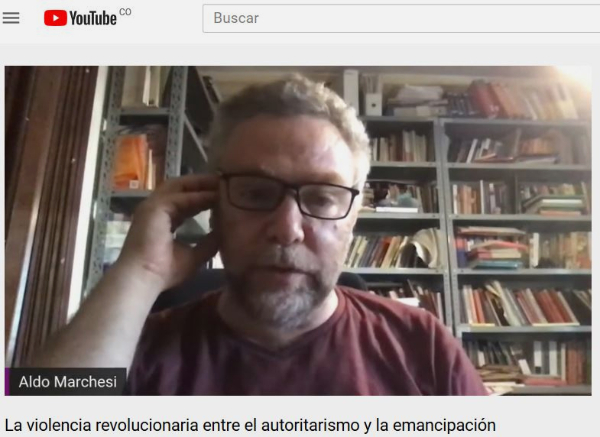 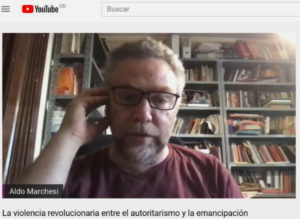 Uruguayan historian Aldo Marchesi (Universidad de la República) was the special guest at the international seminar on history and memory of violence and conflicts in Latin America on September 8, 2020. Professor Marchesi praised the transdisciplinary discussion promoted at the seminar and pointed out that history contributes to the debate based on interpretations and analysis of tensions concerning the past, and criticism. His lecture revolved around the idea of revolution, mainly focusing on the 1960s in the Southern Cone. His basic question was: To what extent is revolutionary violence associated with ideas of emancipation and forms of authoritarianism? This question was starting point of the presentation.

In 1959, the cycle that began with the Cuban revolution set the stage that led to the construction of the term “revolution”, associated with anti-imperialism and the ideal of egalitarian societies. In the 1990s and the 21st century, there was a change of paradigm, according to Marchesi, regarding the revolutionary ideas of violence. He distinguished the two moments and clarified that, in historical terms, the relations between ethics, violence, and politics were very different from what they are now, or at least they are in the Southern Cone. At the time, the idea of sacrificing personal experience for the revolution and for a horizon of expectations prevailed. Today, the notion of human rights has become an emancipatory model—with multiple contextual interpretations—that strongly condemns violence. The tension lies, then, according to the historian, in understanding this anachronism: “How can we evaluate the revolution from a (historical) time that is not revolutionary?”.

Aldo Marchesi proposed a revision of the way in which some actors thought. In the first place, the Armed Forces assumed the revolution in the sixties as an external threat associated with the idea of communism and subversion. The response had to involve counterinsurgent reinforcement and greater power for the military. This position justified and benefited the establishment of dictatorships in the Southern Cone during this period. In Uruguay, the government’s response—i.e., its version of counterrevolution—was very violent, with nationalist ideals running counter to communist ideas. “The threat to the country is so great, that it justifies a recourse to excessive violence” explained Marchesi. Second, and ideologically, the actor represented by the left symbolised revolutionary violence on the continent in support of Cuba and in the voice of Latin America (a “we”) against the United States (an “other”). The following are identified: a) a strong defence of the national, according to the conceptions of each actor; b) the absence of a critique of violence from an ethical perspective replaced by a discussion around the ethics of war; and c) the idea of politics in belligerent terms.

From within academia, the sociology of modernisation sought to explain the causes of the emergence of revolutionary violence in countries. From the concept of social anomie, violence was argued because of the accelerated processes of modernisation, which generated violent reactions among certain social sectors. Another approach was Latin American structuralism, from which it was argued that political violence was an inevitable consequence of the malaise of the middle and popular sectors, among other reasons, because of the unequal distribution of income. Professor Marchesi indicated that the Latin American academia of the time, however, did not show much interest in the issue of political violence.

Southern Cone societies suffered radical authoritarian processes. In terms of torture and murder, state practices were more violent than the violence used by the guerrillas in Argentina, Chile and Uruguay. People’s lives were radically transformed during the “state terrorism” of the civil-military dictatorships. The problem of revolutionary violence was disappearing and, in that sense, state terrorism was effective, but it came with enormous ethical and social costs.

At the end of the 1980s, leftist ideological political expressions began to disappear. There was also a paradigm shift in the way we approached the problem of political violence. Aldo Marchesi highlighted two aspects of this change: the consolidation of liberal democracy as the undisputed political regime and the idea of human rights associated with the notion of violence against the body (no to torture, yes to life).

Marchesi quotes the French author Francois Dosse, our society began a process of reflection on the past from a controlled anachronism as early as the 1990s. The questions that were central in the 1960s and 1970s changed in the historical time of the 1980s. In this sense, the challenge posed to historians is to understand that this past cannot be seen with the same eyes as today, nor can it be judged from the events of the present. It has to be seen from that historical moment, which implies a hermeneutic approach to understanding the past, assuming historical distance and otherness in the interpretative frameworks. Paraphrasing Friedrich Engels, Aldo Marchesi explained that revolution is an authoritarian phenomenon. The relationship between liberalism and authoritarianism is thought of differently in modernity and in our contemporaneousness.

* In the 1960s and 70s, violence was thought of from an ethical standpoint. We must openly discuss that historical time and its complexity.
* We must identify an ethic of revolutionary violence, if one even exists, according to the societies in question. In the Southern Cone, there is a recognition, based on revolutionary violence, that in that era, for example, people were executed, but not tortured.
* The word “reconciliation” should be treated with care. At least in the Southern Cone, this idea of reconciliation is being reviewed as it is a very complex notion. It is thought of more in terms of empathy and actors in terms of what has been experienced in the past. If the rebel killed in defence of ideals in common with the people, we must try, at least from a social perspective, “to understand the logic of that political actor of the sixties, seventies and even of the eighties”, recommended Marchesi.
* We should avoid thinking of the violence of that time as absolute evil, because there are political and social truths that explain such violence, including that of the state. The contribution from history to this perspective is fundamental in this understanding.
* The discussion on the legitimisation of violence is crucial. Paradoxically, the violence of the states in Latin America – strengthened in military terms and with a more coercive exercise of power – is not the object of critical reflection. It is precisely this phenomenon of the use of state force that has generated a new wave of social movements and protests around the world, a phenomenon that is perfectly in line with a way of opposing this state violence.

Download the full itinerary for the series (.pdf, in Spanish) / Download the factsheet for the next session (.pdf)

The international seminar on the history and memory of violence and conflict in Latin America is an online academic programme that brings together researchers, students, teachers and audiences interested in such issues from an international perspective and across different disciplines. The series of lectures is organised by CAPAZ, Universidad del Norte (Colombia), the CALAS Centre (Merian Centre for Advanced Latin American Studies), and the Justus Liebig University Giessen (Germany).