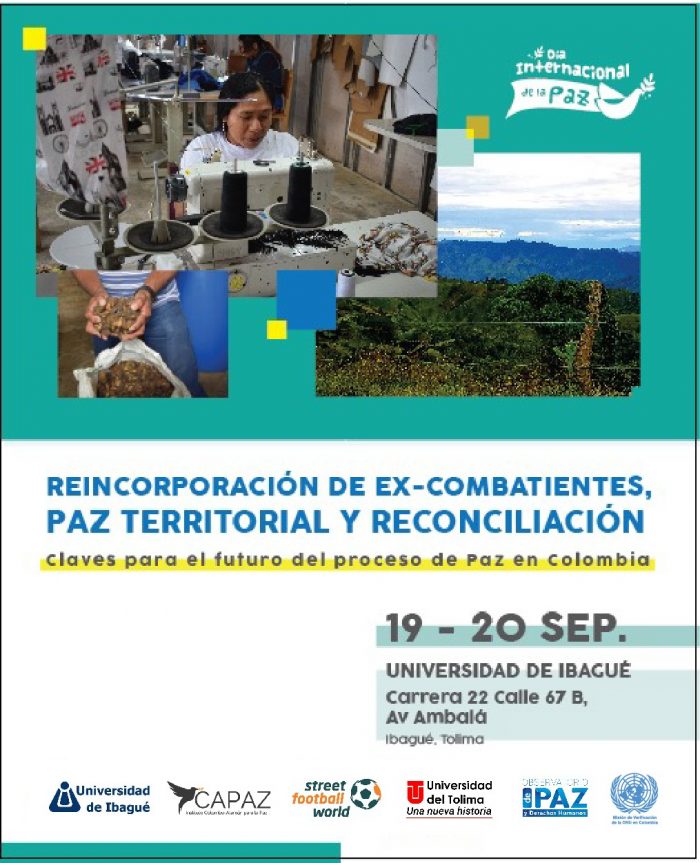 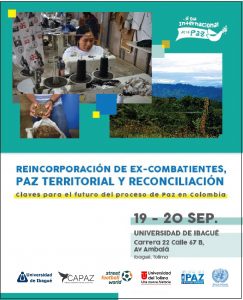 The German-Colombian Peace Institute – CAPAZ, the United Nations Verification Mission in Colombia and the universities of Ibagué and Tolima have organised the event “Reincorporation of former combatants, territorial peace and reconciliation. Keys for the future of the peace process in Colombia”, which will take place on September 19 and 20, 2019 at Universidad de Ibagué. The event commemorates International Peace Day, celebrated on September 21 around the world.

The main objective of the academic meeting is to insist on dialogue to be implemented in order to build sustainable peace in Colombia and on the importance of the territorial perspective for the reintegration of former combatants.

The event will bring together representatives from academia, social leaders from local communities, and delegates from international organisations such as the United Nations Verification Mission in Colombia.

The central themes will include peacebuilding in the department of Tolima, in south-western Colombia; the future of the reintegration and reincorporation process; a number of productive projects carried out by former combatants; and the situation of the Territorial Training and Rehabilitation Spaces (ETCR).

Following the main event, the participants will be invited to take part in a football tournament, convened by Street Football World and Fundación Selección Colombia. Both organisations work, national and internationally to promote football and sport as a catalyst for social change. Worth mentioning is the participation of Elkin Soto Jaramillo, former national team player for Colombia and former player for Germany, Maguncia 05.

This is the first time that CAPAZ and the United Nations Verification Mission in Colombia have joined forces, in this case, in partnership with universities in Tolima, to offer a space for exchange between academia, civil society, those taking part in processes of reintegration, and representatives from international cooperation.