“Without the help of civil society, the fight against forced disappearances would be impossible”: Stefan Peters at the CALAS Platform for Dialogue in Guadalajara 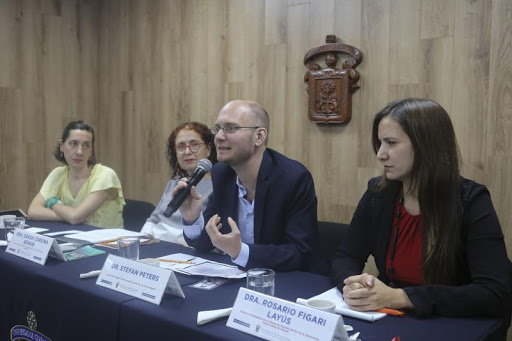 “Without the help of civil society, the fight against forced disappearances would be impossible”: Stefan Peters at the CALAS Platform for Dialogue in Guadalajara

CAPAZ was one of the organisers of the Platform for Dialogue entitled: “Political repression, forced disappearance and resilience strategies in contexts of inequality”, held on 26 and 27 February 2020 at Universidad de Guadalajara.

The event consisted of six thematic panels and two round tables on the multiple dimensions of forced disappearance in Latin America. They ranged from the theoretical and practical implications of disappearance to the role of relatives, organisations and the State in the search for disappeared persons.

Researchers, representatives of civil society organisations, family and victims’ organisations discussed the issue of forced disappearance and considered that one of the objectives of the event had been fulfilled: to exchange knowledge and experiences of different academic and social actors in various Latin American countries.

Another of the successes of the event was the visibility of the work carried out by social organisations and victims’ collectives which, by applying constancy and political pressure, demonstrate that it is fundamental to continue the struggle against forced disappearance in order to clarify these crimes and guarantee their non-repetition.

The Platform for Dialogue is run by the Mexico-based Maria Sibylla Merian Centre for Advanced Latin American Studies (CALAS), and was organised by CALAS, CAPAZ, JLU Giessen Chair of Peace Studies; Universidad de Guadalajara, Bread for the World, and the Heinrich Böll Foundation offices in Colombia, Mexico, and the Caribbean. The event was held at Universidad de Guadalajara’s Centro Universitario de Ciencias Sociales y Humanidades (CUCSH). 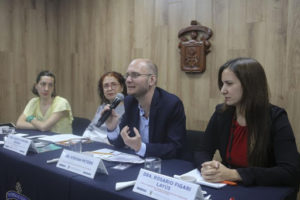 Stefan Peters criticised the State’s under-recording of disappearances, while emphasising the need to analyse the phenomenon of disappearance beyond the figures. Photo: UdeG

Forced disappearance and its interrelation with other issues

The CAPAZ Academic Director and Professor in Peace Studies at Justus Liebig University Giessen (JLU), Prof. Dr. Stefan Peters stated that forced disappearance is a concern in many parts of Latin America, and that each case or country has its own specificities. He was emphatic about the interrelationship of forced disappearance with other problems in the region such as social inequalities: “The profile of a disappeared person is one that often shows the strong social inequalities present in Latin America”. Also, in terms of drug trafficking, in which some European countries or the United States play a role: “I think it is important to mention that this is not only an issue for Latin America but one that requires solutions worldwide”. He also stressed that the states in the region often do not do enough in terms of searching for people who have been reported missing, highlighting the work of family members and civil society organisations: “Without the help of civil society it would be impossible to fight against disappearances”.

Dr. Rosario Figari Layús, researcher for the Chair of Peace Studies at JLU Giessen, stressed the importance of the event, on the one hand, as an opportunity to meet actors and sectors working on issues of forced disappearance in various countries, in order to complement the work. In this respect, she stressed the importance of universities becoming committed actors in the fight against disappearances. On the other hand, she highlighted the event as a space in which to learn about the dynamics, the modalities and the violence involved in forced disappearance in Latin America since the seventies until today.

“It is a type of violence that seeks impunity for the perpetrators: it seeks to make people’s bodies disappear, to make evidence disappear”, said Dr. Figari Layús. In countries like Colombia and Mexico, impunity is currently over 90%, making it important to question those responsible for disappearances and the responsibility of the State, by action or omission, in these cases. The researcher also identified  the lack of resources as a structural problem in almost all countries, a lack that hinders the effective implementation of human rights policies and support for families in their search for the disappeared.

Karina Ansolabehere, professor at Universidad Autónoma de México (UNAM) focused on the relationship between inequality and the practice of disappearances. She also highlighted the shift in the possible causes of disappearances, from their use in the dictatorial regimes of the Southern Cone to the present day in countries such as Mexico and Colombia. “Previously, they linked the phenomenon to authoritarianism and the disappearances of political opponents. But today that paradigm has been broken, as people from practically all sectors disappear and these disappearances are no longer exclusive to a political context. However, there are logics that are shared in both scenarios such as concealment and using people in an expendable way”. Professor Ansolabehere also reported that “in Mexico, there are 60 thousand disappeared people, but there are people who are at greater risk than others since disappearances are concentrated in already marginalised populations”. 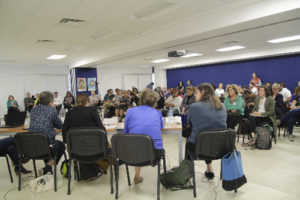 Participants at the CALAS Event in Guadalajara. Photo: UdG

Another issue discussed at the conference was that of forensic investigation. Carmen Osorno, representative of the Argentine Team of Forensic Anthropology pointed out that forensic support must be provided with the approval of the families and the knowledge of the authorities, given that the chains of custody of all genetic samples must always be safeguarded. Alejandra Guillén highlighted the journalistic work on forensic issues necessary to expose public information on the finding of mass graves and, of course, all the bodies that have been exhumed and identified from them. The German documentalist Anne Huffschmid presented fragments of her audio-visual project Forensic Landscapes, which gives an account of the search processes in different states of Mexico.

“The forensic challenge in the search for missing persons is to find the model that will allow for the accurate identification of people who are located, for example, in a mass grave. Families and forensic experts cannot per se confer legal certainty to a finding and its identification; State actors are required for this”, said Cath Collins, who pointed out the different forensic models that exist in Latin America: State models, mixed models (State and citizens) and citizens only.

Rosalina Tuyuc is the founder of Coordinadora Nacional de Viudas de Guatemala (CONAVIGUA). She has been looking for her father and husband –disappeared by the Guatemalan Army—  for thirty-eight years. “I cried for 22 years, until one day I thought: ‘I’m not going to cry anymore, Life is so short that we have to live it and we are going to live it together with the stories left by our disappeared‘; so I made the decision not to mourn their absence but to relive their story“, she explained. She also stressed the need for self-care in women who fight and resist. She recalls that it is important to work on healing processes, because the damage, impunity and violence with which they have been touched is “too much for any human being to bear”.

Dr. Sarah Corona Berkin, Guadalajara-based CALAS director, highlighted the spirit of the conference and of CALAS as a network of German and Latin American universities, whose purpose is to disseminate the activities it organises and high-level interdisciplinary studies on four themes: violence, inequality, ecological crises, and identity crises in Latin America. State partners, non-governmental organisations, universities and artists also contributed to the Platform for Dialogue in Guadalajara.