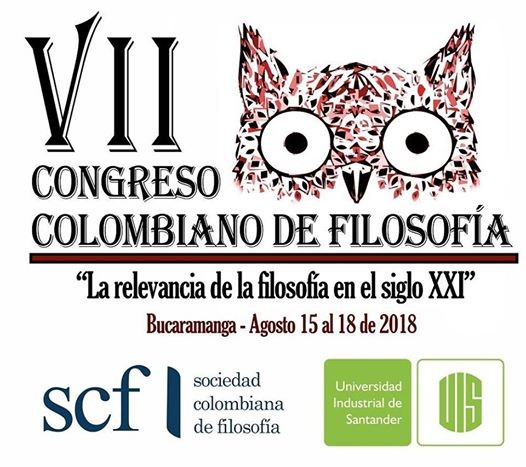 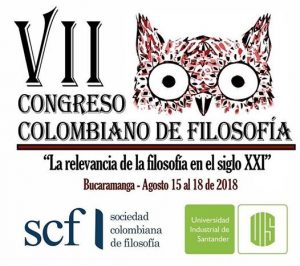 Flyer of the VII Colombian Congress on Philosophy.

Juliana González, the CAPAZ Scientific Collaborator, participated in the VII Colombian Congress on Philosophy organised by Universidad Industrial de Santander (UIS) with her lecture “Critical historiography of political violence in the work of Hannah Arendt: On the relationship between justice and memory”.

The Congress took place between August 15 and 18, 2018 at UIS in Bucaramanga, capital of Santander. The academic event, called by the Sociedad Colombiana de Filosofía (SCF) in cooperation with Colombian universities, takes place every two years, with this years’ Congress being organised by UIS under the title “The relevance of philosophy in the 21st Century”.

Memory and social inequality in Colombia 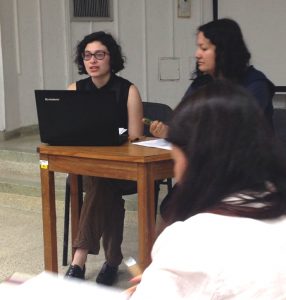 Juliana González Villamizar during her lecture at UIS. / Photo: Private.

Juliana González’ work is part of a research project that she has been working on as the CAPAZ scientific collaborator on memory and social inequality in Colombia, focusing on the participation of Colombian women’s organisations in the instruments and scenarios of transitional justice dedicated to the construction of historic memory and clarification of the truth.

Based on Hannah Arendt’s idea of the “politics of narrative”, Juliana González examines the possibility that the political theory undertaken through historical practices that enter into dialogue with memory and testimony can give rise to historical conceptions of gender-based violence within the framework of the Colombian armed conflict, which may be able to contribute to substantially increasing women’s equality in the future.

The dialogue involved students and teachers from the country’s philosophy programmes as well as people interested in the topic from other disciplines of the human and social sciences.

Juliana González also attended the symposium: “Philosophy, violence and conflict: Women’s voices” during the Congress. This was a space for the voices of distinguished Colombian women academics, like professor María Victoria Uribe (Universidad del Rosario), who talked about women during the so-called La Violencia, basing herself on Martin Heidegger’s concept of dasein. She also talked about several aspects of the study presented in her book Hilando fino: voces femeninas en La Violencia (2015).

Professor María del Rosario Acosta (DePaul University, Chicago) presented new considerations within her current research on the construction of historical memory from a perspective of trauma. Professor Camila de Gamboa (Universidad del Rosario) provided a contribution focusing on the critical political discourse within the peace accords on so-called “gender ideology”, and its implication with respect to the exclusion of LGBTI people from Colombia’s post conflict society. 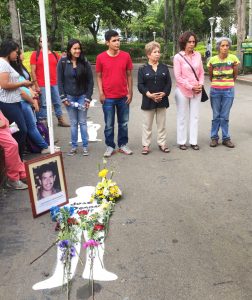 AMOVI organises activities with the community to honor the victims. / Photo: Ivonne Suárez.

In her visit to UIS, Juliana González also had the opportunity to meet with historian Ivonne Suárez Pinzón. Professor Suárez is well known at UIS for her work at the Archivo de Memoria Oral de las Víctimas -AMOVI- (Victims’ Oral Memory Archive), where she has gathered and organised a large archive with many interviews and life stories of victims of the Colombian armed conflict.

The AMOVI archive includes, for example, life trajectories of the victims of sexual and gender violence, forcibly displaced and settled in Barrio Café Madrid in Bucaramanga between 1971 and 2008. AMOVI has an open documentation centre for topics including conflict, political violence, and human rights. It also offers training workshops for memory managers and training in creation and management of human rights archives.

At the foundation of the work of professor Ivonne Suárez is the concept of reasoned historical memory, through which she advocates in favour of a work of memory based on analyses of the armed conflict which emerge from the conversation between victims and researchers, together with exercises of contextualisation and critique that exclude false neutrality and consider the circumstances of the current persistence of political violence. The AMOVI archives represent forms of resistance to oblivion and instruments for the denunciation of serious violations of human rights in Colombia. 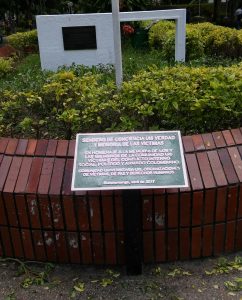 Professor Suárez is also known at UIS for the different places of memory that she has installed in the University campus. On a visit guided by professor Suárez herself, Juliana González was able to go to some of these emblematic places such as the Sendero de Conciencia UIS Verdad y Memoria de las Víctimas and the Espacio de Pensamiento Chucho Peña, erected in memory of the Unión Patriótica poet and militant, Jesús María Peña Marín, disappeared and killed in Bucaramanga in 1986.

Click here for more information about the VII Colombian Congress on Philosophy.