THE DAILY ACTIVITIES AT THE CAPAZ WINTER SCHOOL 2018

THE DAILY ACTIVITIES AT THE CAPAZ WINTER SCHOOL 2018

With Pontificia Universidad Javeriana coordinating the event, the five Colombian founding universities of the German-Colombian Peace Institute – CAPAZ in Bogotá served as the venue for the CAPAZ 2018 Winter School: “Memory, truth, and reconciliation”. The School ran from November 26 to 30, 2018, and hosted German and Colombian grant-winner master’s and Ph.D. students, and peace builders from different Colombian regions.

Two aspects of the school deserve special mention: first and foremost, the school provided a meeting point for people who may ordinarily not have the chance to meet and exchange experiences; and secondly, it highlighted different perspectives on the thematic axes proposed.

The CAPAZ Winter School 2018 set out a conceptual and practical journey through the challenges associated to the construction of memory, truth, and reconciliation in peacebuilding environments such as scenarios of peace negotiation or agreement implementation.

The methodology used was similar to the one applied in the first school which took place in 2017. Students took part in theoretical-conceptual sessions in the mornings and activities aimed at knowledge and experience exchange, in the afternoons. 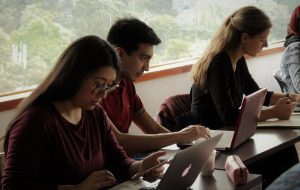 Mauricio Arcila spoke about the concepts of memory, history, and truth, and their interrelation. He began with the idea of particular and selective memory, which can be mediated by values and interpretations, and transmitted culturally. He also referred to the tension between hegemonic and not dominant memory, and the power disputes in relation to the meaning of the past.

We are not always direct witnesses of the facts, so we need to consider memory from a critical perspective. Memory mutates and is alive in that it is activated, and thus, somehow contextualised and disciplined by history.

Professor Arcila highlighted the value of the testimonials made before the Truth Commission (CEV), as long as these are not merely anecdotal and that they are historically contextualised. He also considers that, although priority should be given to the memories of direct victims, we need to also make sure we include indirect memories as well as those of the aggressors. 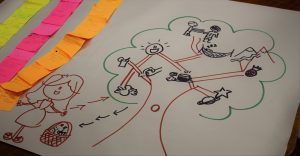 The students could exchange experiences on memory and reconciliation. / Photo: Claudia Maya

Memories are an expression of power and historical identities

For Claudia Mosquera (Universidad Nacional de Colombia), geographical territories behave as cultural areas. Events can occur in a territory, but the communities that share cultural features end up appropriating such events, revealing the complexity of the realities of the conflict and the need to extend our perspective to analyse its causes and effects. To construct memory, we need to focus on cultural territories before we consider geographical ones.

Professor Mosquera talked about a review of memory based on the responsibility of different actors, not only the State. She explained that there are power groups that benefit from the silence and society’s ignorance. She maintained that “to think about truth is a political terrain, which is why it will always be subject to tension and debate”.

“The exercises of reconciliation serve to repair historical asymmetries”: Mosquera

There will always be dissident memories that will hold on to pain. There are historical identities and historical pain that remain in family memories and are passed down from generation to generation.

Claudia Mosquera prefers to talk about “memorial fragments”, which are those that allow reconciliation. Reconciliation has an ethical purpose to allow us to stop committing the same crimes, but to alleviate the pain is almost impossible. The only thing that reconciliation should aspire to is to reduce and alleviate some of the social pain. If we can relocate these lives, we have been successful in allowing these people to recover their dignity.

The practical function of memory

For Mosquera, the only function that we can attribute to memory is to remind us that some social groups have gone down in history as groups that have been subject to suffering and violence. Reconciliation is a moment to reflect on the place occupied by these social groups that have experienced violence today and in the past. The professor asserted, “Memory allows us to be constantly aware of the destructive nature of societies”.

The Observatory for Peace and Conflict at Universidad Nacional de Colombia coordinated an afternoon workshop to exchange individual experiences and develop two dimensions of memory: the individual dimension and the collective dimension. The individual narratives told on the first day of the School helped to create familiarity and empathy among the group of participants. 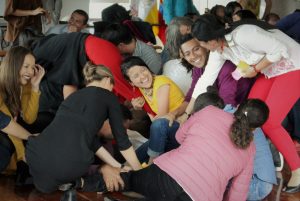 The CAPAZ School helped to create familiarity and empathy among the group of participants. / Photo: Claudia Maya

The second day of the School, which took place at Universidad del Rosario, focused on Transitional Justice and the function of the Truth Commission (CEV).

Camila de Gamboa’s (Universidad del Rosario) master lecture focused on two questions: what does the duty to remember consist of? And which mechanisms does Transitional Justice offer to seek out the truth?

The professor analysed the pros and cons of the act of remembering from three perspectives: towards the future, the present, and the past. Towards the future, to know about the past in order not to repeat it; towards the past, to locate the victims at the centre of the discourses on truth and reparation; and finally, we remember in the present in order to gain confidence and pay the debt with survivors and descendants.

Challenges of the CEV

Laly Peralta (Universidad del Rosario) helped the group of students to formulate questions on the operability of the Truth Commission (CEV).

The methodology used by Peralta allowed students to associate and discuss questions regarding CEV management in the territories; the way in which the entity will contrast hegemonic accounts and the accounts of Indigenous and Afro-descendant communities; the relationship between memory and truth, concretely, collective truth and the prioritisation of cases; the participation of third parties; the pedagogy in the topics and functions of the CEV; its relationship with the media; and the differential approaches. 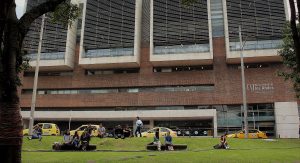 The difficulties and possibilities of reconciliation. Universidad de los Andes

Angelika Rettberg (Universidad de los Andes) introduced the concept of reconciliation based on simple questions about its (complex and rhetoric) definition, the actors that reconcile, the ways in which reconciliation is promoted, and how it is related to peacebuilding.

Professor Rettberg emphasised the need to review the investigation into reconciliation not just in transitional societies but also in societies subject to deep-running violence, as is the case for Latin America.

However, academic analysis and statistical measurements are not enough to shed light on the processes in the territories. Factors inherent to the territorial dynamics and the evolution of the conflict, as well as the heterogeneity of the actors involved make reconciliation a complex process.

Reconciliation in scenarios of violence?

Professor Leopoldo Fergusson (Universidad de los Andes) went over some of the factors in order to elucidate why violence persists in the postconflict, making it difficult to advance in terms of reconciliation processes.

The professor mentioned, among other things, a weak, inefficient, and absent State in some of the country’s regions, which leads to people’s mistrust of the institutions. He also referred to how some sectors and institutions end up benefitting from the conflict. He added that there are differences between the existing perception of reconciliation and its normative definition.

The diversity of the territory and of the actors’ experiences of the conflict require particular processes of reconciliation. A fertile ground for advancing in reconciliation is constituted by most actors’ refusal to continue the war and violence, as well as some of the cultural and experiential features shared by victims and aggressors.

The scenario proposed from Universidad Externado de Colombia showed the possibilities of advancing processes of reconciliation from different areas and through the careful use of different types of language.

Taking the example of the ethnic ethical rules in South Africa, the facilitators invited people to forgive and to build a society of tolerance. They also insisted on rethinking punishable actions as the only modality for reparation and to instead make use of community solidarity and social harmony. Bearing in mind the differences between territories and communities, the peacebuilding and reparation processes should consider the particularities of each of the groups affected by the forms of violence. 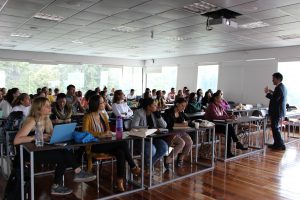 The last day of the CAPAZ Winter School 2018 took place at Pontificia Universidad Javeriana. In his introduction, professor Manuel Salamanca (Pontificia Universidad Javeriana) emphasised that academics should know about and experience the realities of the conflict directly in the territories. The methodological and theoretical base of the research exercise is neither sufficient nor applicable in full, when considering the communities’ problems and needs.

Carlos José Herrera (Truth Commission – CEV) talked about the need to analyse the scenario we are faced with based on the Final Agreement. The phase following the signing of the accords is a good time for society to assume its role in peacebuilding.

For Herrera, we are currently subject to a saturation of basic and generalised information about the conflict, but we have no notion, beyond what the media tells us, just how traumatic this experience has been. The issue Colombian society faces now is how to make the transition less traumatic.

Among its purposes of clarification, recognition, coexistence and non-repetition, the CEV’s mission and challenge is to enable peacebuilding based on true participation. For South Africa, for example, the speaker highlighted the risk assumed by society in setting up a scenario of social catharsis. Although the Final Agreement gives us some guidelines, just how to achieve social participation will be a difficult to reach goal.

Professor and workshop leader Iván Torres facilitated a space of reflection on the accounts of the truth and the humanity of the victims. 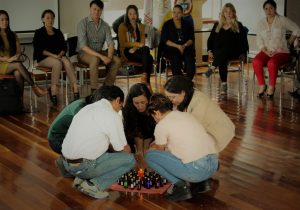 The group expressed the meaning of light, peace, memory, and reconciliation for each of the participants. The exercise allowed a shared reflection in which similar meanings of these concepts were associated, revealing the difficulty and challenge of building a single narrative, in a country that does not give the floor, that kills the word, and in which the word is afraid.

The grant-winners were given posters with the names of people that have been disappeared, assassinated, or forcibly disappeared, and, in an act of recognition of their humanity and memory, the participants wrote a letter to each of the victims.