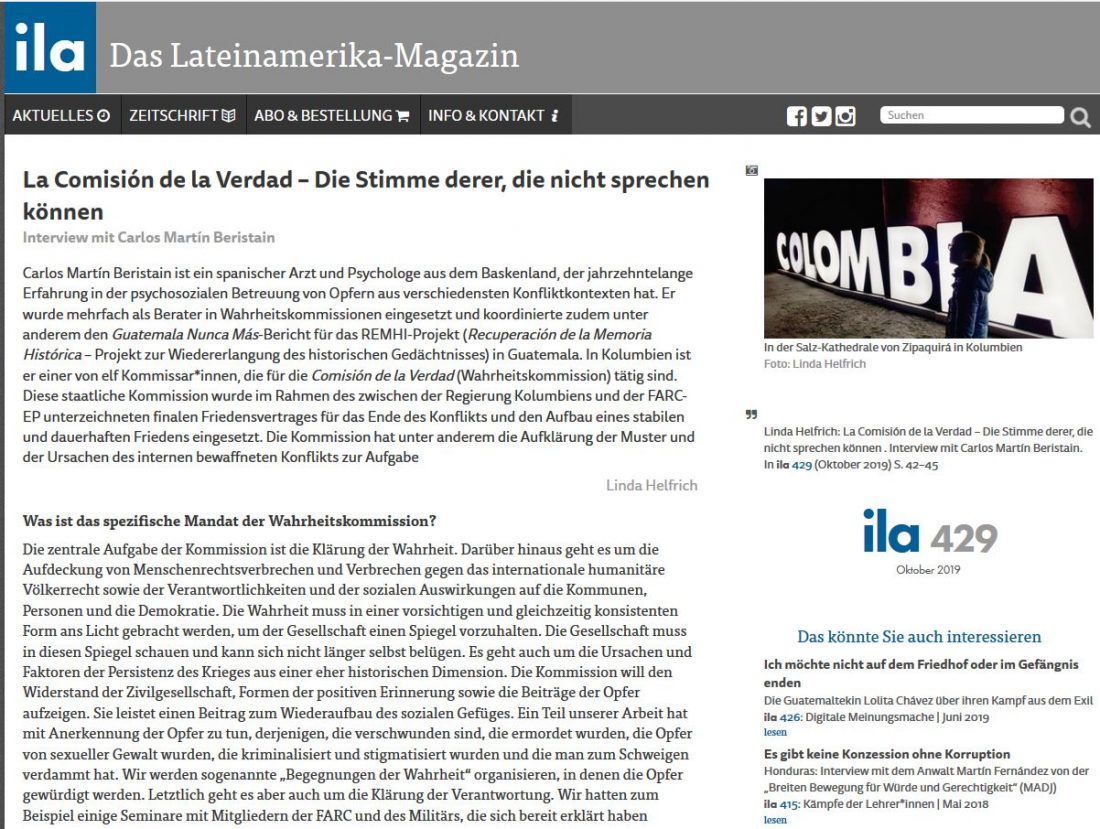 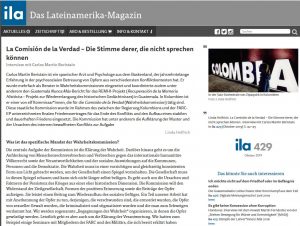 Beristain is a Spanish physician and psychologist with extensive experience in the psychosocial care of victims and has served as an advisor to various truth commissions in various countries. One of his most important missions was the coordination of the “Recuperación de la Memoria Histórica – REMHI” report, on Guatemala.

The interview was originally published in German, but below we offer a summary of the interview in English, as we consider it useful to provide our readers with access to a topic of great importance for CAPAZ in Colombia.

The interview focused on the role of Colombia’s Truth Commission and the obstacles it currently faces in carrying out its mission. For Beristain, if the Commission’s purpose is to clarify the truth – to clarify the violation of human rights and international humanitarian law – this truth must be presented in a “consistent” and “careful” manner, so that it serves as a mirror for society, in favour of a collective vision that rejects self-deception. A “sensitive” and “encompassing” truth that does not succumb to the polarisation that reigns as a strategy to delegitimise its raison d’être (i.e., de-idiologisation as a way forward).

One of the obstacles facing the Commission is the lack of safety conditions for its work. He considers that in Colombia death is a common theme which is why what civil society has achieved is so impressive: “They took corpses out of the river, even though the paramilitaries had prohibited it”, comments Beristain. “How to make the agreement a reality when the government has taken the word “peace” out of its rhetoric?” Guaranteeing safe conditions is a problem of public policy and regional development plans. Political will is required in practice: “If you don’t want to use a shred of effort for transformation, then it’s problematic”, continued the commissioner.

Throughout the interview, Beristain reflects on the practical conditions required to aspire to attaining the truth. He analyses from a social, political, and economic perspective the factors that led to the crimes reviewed by the Commission, and refers to the effects they have on the work carried out so far by this institution.

“We, the victims, know what happened. They, the perpetrators, also know. We want society to know too”. For Carlos Martín Beristain, this answer by a Salvadoran friend to the question about the need for a Truth Commission, offers the key to the work of the Commission of which he is a part in Colombia, namely: “…that society should know what happened, and that it should look itself in the mirror and recognise the truth”.