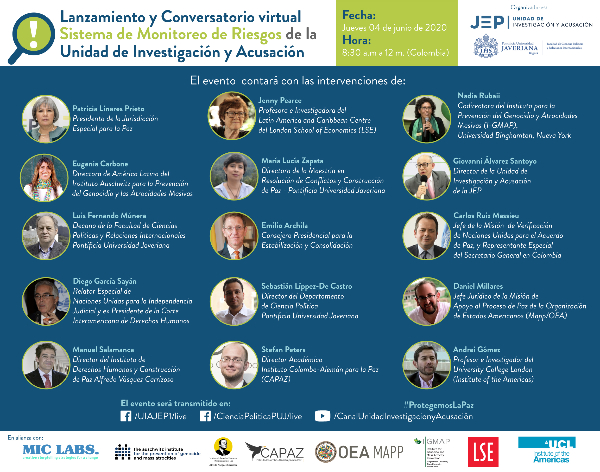 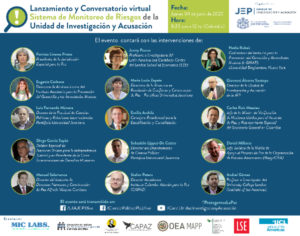 The launch event are supported by CAPAZ, and the School of Political Science and International Relations and the Alfredo Vasquez Carrizosa Institute of Human Rights at Universidad Pontificia Javeriana. The University is a founding member of the CAPAZ Institute.

The initiative is also supported by the United Nations Verification Mission to the Peace Process in Colombia; London School of Economics (Latin America and Caribbean Centre); University College of London (Institute of the Americas); Binghamton University (Institute for Genocide and Mass Atrocity Prevention), and Auschwitz Institute for the Prevention of Genocide and Mass Atrocities.

A tool to protect peacemakers

The System is a new web tool created by JEP, to organise and record published pieces that indicate risk for JEP users –victims, witnesses and others involved in proceedings in the jurisdiction— online and in real time. The platform also features an interactive map that provides up-to-date COVID-19 tracking.

The launch event will include the participation of expert voices representing universities, think tanks and international organisations, in charge of analysing and following up on the issue of risks, violations and the defence of human rights in Colombia and the world.

CAPAZ Academic Director and Professor of Peace Studies at the Justus Liebig University Giessen, Prof. Dr. Stefan Peters will join the academic activities to be held during the launch event, which in turn will be hosted by JEP President, Patricia Linares; the Dean of the School of Political Science and International Relations at PUJ, Luis Fernando Múnera, SJ; the Director of the JEP Research and Prosecution Unit, Giovanni Álvarez; and the head of the UN Verification Mission in Colombia, Carlos Ruiz Massieu.

The event will consist of two thematic panels. The first will host Diego García Sayán (former president of the IACHR and UN rapporteur); Nadia Rubaii (Binghamton University); Eugenia Carbone (Auschwitz Institute for the Prevention of Genocide and Mass Atrocities), and Andrei Gómez (University College of London), who will review international lessons in the prevention of grave human rights violations and genocide.

The second panel will discuss the challenges in terms of security and protection of victims and signatories of the Final Agreement in Colombia, under the conditions imposed by the current COVID emergency. CAPAZ Academic Director, Stefan Peters and Manuel Salamanca, Director of the Alfredo Vásquez Carrizosa Institute for Human Rights and Peacebuilding, and spokesperson for Pontificia Universidad Javeriana at CAPAZ, will be part of this last panel, along with Emilio Archila (Advisor to the Presidency of Colombia) and Daniel Millares (Mapp/OEA).

Agenda and Panellists (.pdf, in Spanish)

For more information and direct contact with the JEP’s Research and Prosecution Unit, please write to: juan.velasco@jep.gov.co