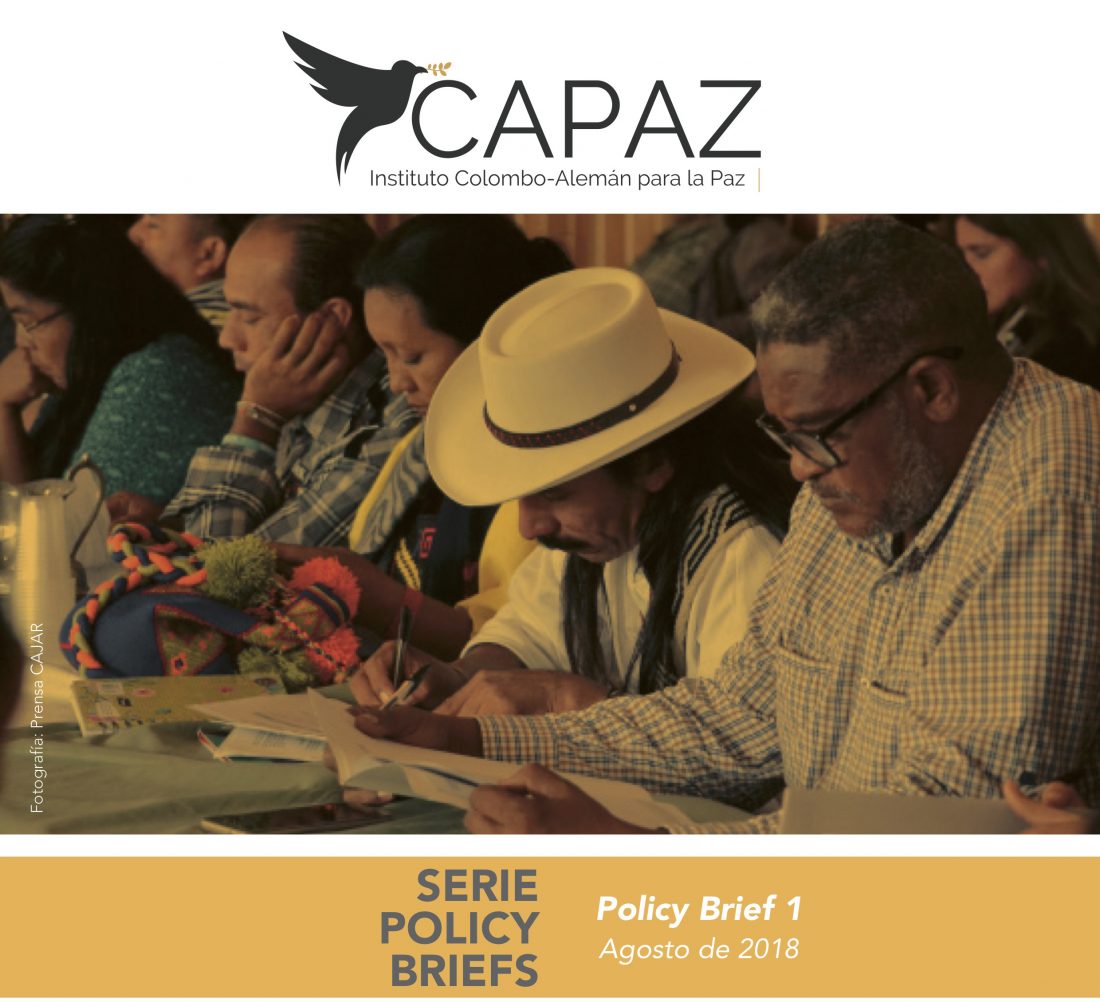 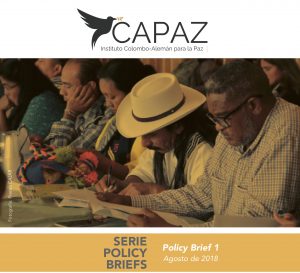 The Policy Briefs include information about researchers’ policy proposals and recommendations on topics related to sustainable peacebuilding in Colombia. They provide access to scientific knowledge and knowledge transfer reflecting the research work undertaken to society in general and political actors in particular.

The CAPAZ Policy Briefs can serve to understand and approach concrete problems faced by societies in transition, and target those who design, formulate, and have power of suggestion and decision over public policies that can attend the needs resulting from such issues.

This first Policy Brief is called “From the Transitory Rural Zones for Normalization to Territorial Peace: Tensions, conflicts and challenges in Colombia’s southwest”, and it presents a synopsis of an analysis on the establishment and transformation of the Transitory Rural Zones for Normalization (ZVTN), today known as Territorial Spaces of Training and Reincorporation (ETCR), in the departments of Cauca and Nariño, in Colombia’s southwest.

Supported by the Heinrich Boell Foundation, CAPAZ organised an exploratory study undertaken by German and Colombian researchers between March 2017 and March 2018. Its purpose was to use participative research to accompany the process of demobilisation, disarmament, and reintegration (DDR) in the ZVTN/ETCR, specifically in the municipalities of Buenos Aires, Caldono and Tumaco.

The Policy Brief reveals several circumstantial problem areas faced by local actors in ZVTN/ETCR and their respective communities. It illustrates the great challenges to reaching inclusive, lasting, and democratic territorial peace, and presents conclusions and recommendations for the development of more adequate policies to this end.

Local challenges to the implementation of the Final Agreement

CAPAZ’ first Policy Brief that we present here has been developed in order to highlight the difficulties relating to the implementation of the peace accords in some ZVTN/ETCR, which mirror the challenges of national-level peacebuilding.

In the words of Michael Bock, outgoing German Ambassador in Bogotá, “this Policy Brief is dedicated to the implementation of territorial peacebuilding, a goal of enormous relevance for national development, with special emphasis on the Colombian southwest, where the conflicts and challenges of the peace process as a whole are present on a small scale. It is important, therefore to cooperate in the old areas of conflict, with local actors, to gain a solid understanding of the situation”.

Future CAPAZ Publications will include a series of working papers.

The CAPAZ Policy Briefs are available to the public free of charge and regulated by Creative Commons Attribution parameters. CAPAZ is not accountable for any errors or imprecisions made by the authors in the Policy Brief, or for the consequences of their use. The opinions and views of the authors are not necessarily those held by CAPAZ.

We invite public opinion, academic communities, and researchers to read and disseminate the new CAPAZ Publications.