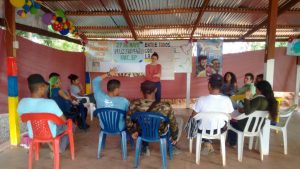 Within the framework of the “improving the mental health of the forcibly displaced in Colombia” project funded by the German Academic Exchange Service  (DAAD) and supported by Instituto CAPAZ, Freiburg University (Germany) and the public health Institute at Universidad Javeriana will teach two courses on the problem of depression in the forcibly displaced population in the Cesar department.

This course is a continuation of the consultancy work carried out by Freiburg University and the public health Institute at Universidad Javeriana in the Cesar department. In August 2016, professors Axel Kroeger and Sonia Díaz-Monsalve (Freiburg University) and Enrique Peñaloza and Andrés Cubillos (public health Institute at Universidad Javeriana), gave a training workshop aimed at the personnel working in the mental-health area of the Health Department. In June 2017, Professors Michael Wirsching and Anne-Maria Müller from Freiburg University took part in the training workshops dealing with the psychosocial aspects of health, derived from their participation in the “Global Mental Health” program.

The project “improving the mental health of the forcibly displaced to Colombia’s urban areas”, has a duration of four years and includes two components: the clinical mental health area and its management area.