On the 1st of May 2017, Dr. Carlos Mauricio Nupia assumed the role of manager at Instituto CAPAZ, making him responsible to drive the Institute’s work so that it can fulfil its objective of contributing to the peace process in Colombia by promoting research, education and consultancy. 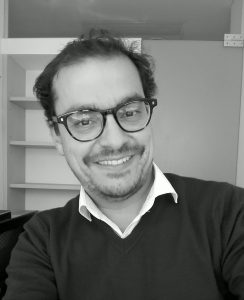 Dr. Nupia has a PhD in Political Science from the Free University of Berlin (FUB); a Master’s in Urbanism from Universidad Nacional de Colombia; and a Degree in Social Communication and Journalism from Universidad Externado de Colombia. He has worked as a researcher in topics related to international scientific cooperation, the international transfer of knowledge, and institutional change of public policy. He has been an advisor for policy design and international relations plans for the promotion of education, Science, Technology and Innovation.

He has worked as a professor of Public Policy and International Cooperation in universities including Universidad Externado de Colombia, Universidad del Norte, Universidad Industrial de Santander and Pontificia Universidad Bolivariana in Medellín. He led the Science Policy and International Relations Department of the Colombian Observatory for Science and Technology (2013-2017) and was the director of the Office of International Relations at Colciencias (2000-2003 and 2007-2008) and at Universidad Nacional de Colombia (2004-2007). He currently works on topics such as the dialogue between scientific communities, the government and society, and the construction of the interface between science and politics in dealing with the post-conflict period in Colombia.

More information on Instituto CAPAZ’ Mission and it scientific and administrative personnel is available at: https://www.instituto-capaz.org/conozcanos/?lang=es