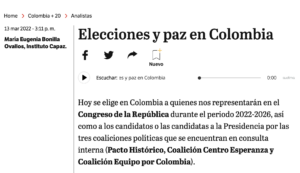 In her column, Dr. Bonilla writes about the March 13 elections. She emphasises the importance of these elections for the peacebuilding process and the implementation of the Agreements, since for the second and last time ten seats will be assigned to the Common Party @comunes (ex-FARC), five in the House of Representatives and five in the Senate. Furthermore, 16 representatives of the Special Transitory Peace Circumscriptions (CTEP) were elected for the first time yesterday in the rural areas of 167 municipalities of the 18 departments most severely affected by the armed conflict in Colombia.

“If we understand the Peace Agreement as a State policy that commits at least the next three presidential terms to its implementation, a commitment to safeguarding it must be clearly established in the programmatic agendas of the presidential candidates. This has not been the case so far in candidate discourses, nor in the demands of the electorate” —María Eugenia Bonilla

María Eugenia Bonilla Ovallos, PhD, is Director of the Institute of Political Studies and Coordinator of the Master’s in Political Science and the Master’s in Public Policy and Development at Universidad Autónoma de Bucaramanga (UNAB), Colombia. She conducts research on security, migration, and public policy issues, and is a member of the Political Science and Political Institutions and Public Opinion research groups at UNAB. She has a BA in Economics, a PhD in Rule of Law and Global Governance from Universidad de Salamanca (USAL), and is a spokesperson for UNAB at CAPAZ.

Read last month’s CAPAZ column: The political logic of the assassination of social leaders in Colombia (by Juan Albarracín and Jonas Wolff)