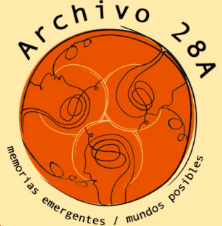 “A search that never ceases, a café on the riverbank where chalupas full of bananas, cocoa and the odd message pass by. In this possible world of random encounters, many trajectories converge to present us with a soliloquy of agitated times, of appointments to be kept, a story to be told in other times and other latitudes that do not exist and that cannot be traced with the rationality of technique, but are hidden in the sensitivity of memory and in the depths of the heart. Here, the possible world is a meeting with one who is no longer here”.

This podcast is the result of the Archivo Oral 28A: First-person experiences and resistance project. It was the winner of one of our research calls for proposals last year

Archivo Oral 28A: First-person experiences and resistance project was created during the National Strike of 2021 in Colombia, as a citizens’ initiative intended to generate a response to the rhetoric of vandalism that both the government and some media outlets have been building around the massive social mobilisations that began on 28 April. The premise of Archivo 28A is to collectively construct a counter-narrative aimed at dismantling the discourse that criminalises social mobilisation through the socialisation of intimate personal experiences/stories, appealing to the subjectivity of the participants as a tool through which to understand the needs and feelings of other(s).

Find out more about the project

One of the results of this is the Archivo Oral 28A research-creation: Memorias emergentes / mundos posibles podcast, launched last week in Bogotá.

Listen to the episodes that were produced together with the ESTEPA research group at Universidad Nacional de Colombia and the Institute of Latin American Studies at the Freie Universität Berlin, and supported by CAPAZ.