TEACHING HISTORY: THE CASE OF GERMANY IN AN ONLINE DIALOGUE BETWEEN CAPAZ AND THE COLOMBIAN TRUTH COMMISSION 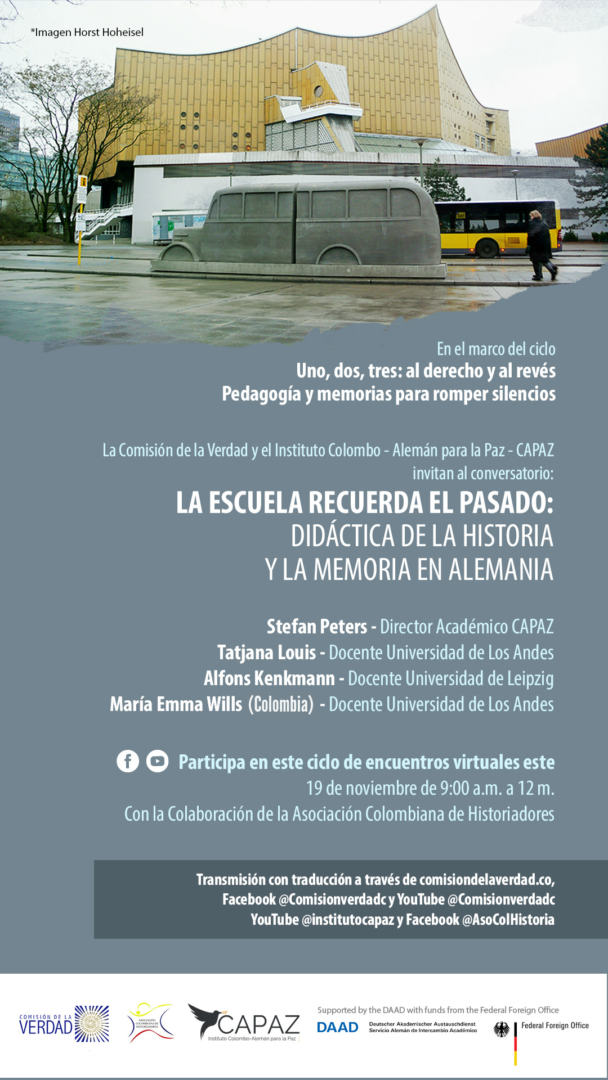 TEACHING HISTORY: THE CASE OF GERMANY IN AN ONLINE DIALOGUE BETWEEN CAPAZ AND THE COLOMBIAN TRUTH COMMISSION

“The school remembers the past: teaching history and memory in Germany” is the title of the second event in the cycle on the teaching of memories, history and truth, organised by CAPAZ and the Colombian Truth Commission. The meeting will be held on Thursday, November 19, 2020, at 9:00 a.m. (Colombia time) and will be transmitted live, with simultaneous translation (German and Spanish), through the CAPAZ YouTube channel and the Commission’s Facebook and YouTube networks. You can also view it on the Colombian Historians Association’s Facebook Live page.

The panel including Professor Tatjana Louis (Universidad de los Andes), Professor Alfons Kenkmann (Leipzig University), and CAPAZ Academic Director and Professor of the Justus Liebig University Giessen, Stefan Peters, will address the issue of memory, emphasizing the didactics of history, both within and outside formal educational settings. The  discussion, chaired by  Professor Maria Emma Wills (Universidad de los Andes), will focus on the German case.

The cycle called: “Uno, dos tres: al derecho y al revés. Teaching memory to break the silence” is an initiative launched by CAPAZ and the Colombian Truth Commission, in collaboration with the Colombian Historians’ Association.

Associate professor and researcher at the Department of Languages and Culture at Universidad de los Andes, where she also coordinates the master’s degree in peacebuilding. In Germany, she completed a master’s degree in medieval and contemporary history and German philology and romance at the Westfälische Wilhelms-Universität Münster. She holds a doctorate in medieval and contemporary history from the Universität zu Köln. Her research interests focus on the social construction of memory, historical consciousness and the teaching and didactics of history.

Professor of History Didactics at Leipzig University since 2003. He has conceived several international conferences and directed several contemporary history exhibition projects. He is a member of numerous boards of curators of German museums and memorial sites. Among other things, he is chairman of the working group for National Socialist monuments and memorials in the state of NRW, the Hannah Arendt Institute for Totalitarian Research (TU Dresden) and serves as scientific advisor to the Federal Foundation for the Revaluation of the SED Dictatorship. He is also involved in the German-Israeli dialogue, a member of the Textbook Committee and its corresponding conferences in Germany and Israel. Alfons Kenkmann was awarded the Cross of Merit of the Order of Merit of the Federal Republic of Germany for his many years of voluntary commitment in the fields of educational policy and culture.

CAPAZ Academic Director and Professor of Peace Studies at Justus Liebig University Giessen, Germany. He studied political science at the universities of Marburg (Germany) and the Complutense in Madrid (Spain). His doctoral thesis focused on the issues of education and social inequalities in Latin America. In his training, he worked on natural resource-based development models, and he is conducting ongoing research on memory studies and transitional justice, North-South relations, socio-environmental conflicts and development theory with a focus on Latin America. He has been involved as a visiting professor and researcher at universities in Cuba, Argentina, Ecuador, and Puerto Rico.

Doctor in Latin American Studies from the University of Texas. Master in Political Science from the University of Montreal and BA in Political Science from Universidad de Los Andes. For most of her professional life, she has worked in academia as a professor in the Department of Political Science at Universidad de los Andes and as a researcher at the Instituto de Estudios Políticos y Relaciones Internacionales (IEPRI) at Universidad Nacional de Colombia. Between 2012 and 2018, she served as advisor to the General Administration of Colombia’s National Centre of Historical Memory and was the author of the pedagogical strategy developed with teachers from different parts of the country. She promoted the Regional Historical Memory Groups in several Colombian universities. In the midst of the peace talks in Havana, between FARC-EP and the Colombian government, in 2014, María Emma Wills was designated as the only woman among the fourteen academics who produced and published an explanatory essay on the armed conflict.

Download the press release with the programme for the cycle (.pdf, in Spanish)