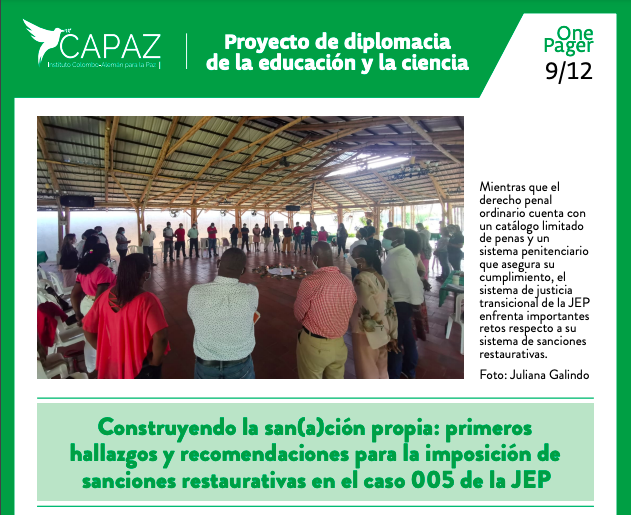 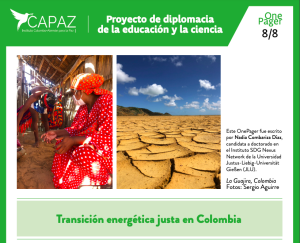 The CAPAZ Education and Science Diplomacy project continues to make progress with its OnePagers. This, the eighth, is titled “Fair Energy Transition in Colombia”.

The purpose of the research is to understand the gaps and the need to rethink the term equitable energy transition in the context of the Global South. This research is led by Nadia Combariza Diaz, PhD candidate at the SDG Nexus Network Institute at Justus Liebig University Giessen (JLU), under the supervision of CAPAZ Academic Director and Professor of Peace Studies at JLU Giessen University, Prof. Dr. Stefan Peters.

This paper by Nadia Combariza reviews the use and definition of the term “fair transition”, from its origin in trade union movements to the present day, based on a critical analysis of the dominant terminology of “fair transition” in climate commitments.

“Notions such as technological sovereignty, decentralisation, and democratisation of energy systems, and freedom as a collective act within the context of social consensus emerge to guide Colombia’s energy transition proposal as the driving force of a broader process, offering perspectives to overcome the current trajectory to which the combination of extractivism, rentierism, and dependence binds us”.

A holistic view of justice in the global energy transition is very important for Colombia. If the Global North continues its consumption pattern, while aiming to be carbon neutral by 2050, large quantities of minerals will have to be extracted for the manufacture of renewable technologies.

It is important to strengthen the technical knowledge on a fair energy transition in Colombia, and to link it with other disciplines such as social sciences and political economy, and the knowledge and visions from the territory, thus making Colombia a global example of energy for local and peaceful sustainable development.