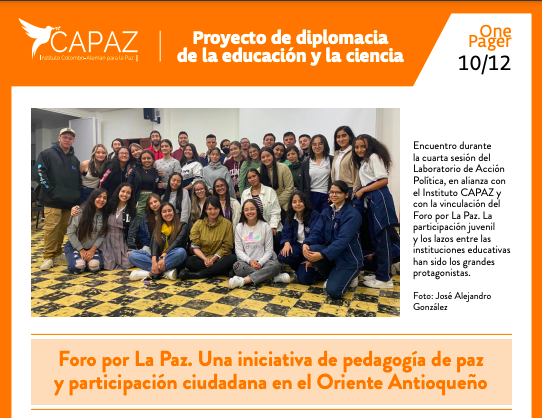 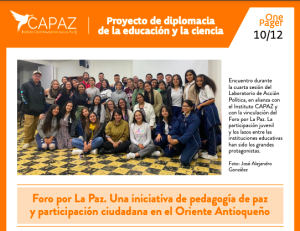 The CAPAZ Education and Science Diplomacy project continues on with its OnePagers. This, the tenth, is entitled “Forum for Peace. An initiative of peace education and citizen participation in Eastern Antioquia”.

The proposal for the Peace Forum emerged at the María Auxiliadora School in La Ceja, Antioquia, as a response to a problem that is present in many elementary, high school and middle school contexts in Colombia: the lack of information about peace, reconciliation and memory building.

The work undertaken with CAPAZ in 2022 was key: an eleventh grade student in the communication and political action youth laboratory met in Bogota with eight other young people from eight of Colombia’s regions, to replicate their experiences in their own territories.

This activity contributed to strengthening the Forum with innovative peace education initiatives involving young people from rural and urban areas, and fostered unity and discussion on issues such as democracy, conflict, and peace.