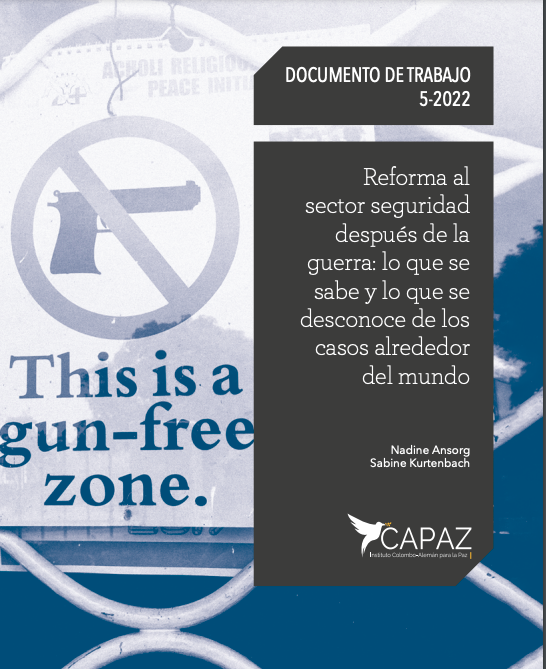 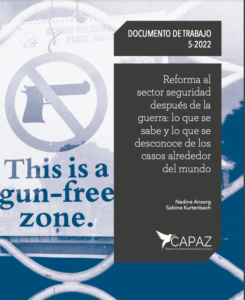 The latest Policy Brief in the CAPAZ editorial line is entitled Security sector reform after the war: what is known and what is not from cases around the world. The text was written by Nadine Ansorg and Sabine Kurtenbach.

Nadine Ansorg is Senior Lecturer in International Conflict Analysis at the University of Kent, UK, and Research Associate at the German Institute for Global and Area Studies, Germany. She researches institutional reforms in post-war societies, especially security sector reforms.

Sabine Kurtenbach is a senior researcher at the German Institute for Global and Area Studies and honorary professor at Philipps Universität Marburg, Germany. Her work analyses transformations from war to peace, with a focus on violence, security, institutions, and youth.

This Policy Brief is part of the CAPAZ Línea Azul publications, which include academic works related to the Integral System of Truth, Justice, Reparation and Non-Repetition (SIVJRNR).

Reforms of security sector institutions (SSR) are often crucial to international support for peacebuilding and democratisation. Although there is no general definition of SSR, it includes demobilisation processes for former combatants, mandate reforms, and personnel from the Police, the Armed Forces, and the judicial sector. A comprehensive approach to security governance reforms is important as long as these reforms go beyond ending a civil war and focus on reducing different manifestations of violence and on citizen security. The document introduces the international debate on SSR; presents experiences from different regions; and promotes a new approach, namely, SSR at the intersection between state and society. External actors can support SSR processes, but they should not impose one-size-fits-all reforms. The success of profound reforms depends on strategies tailored to specific contexts. This entails the inclusion of functional equivalents (e.g., traditional authorities), as long as these are governed by human rights. Ethnic minorities and women must also be included, both in the design and in the institutions themselves.