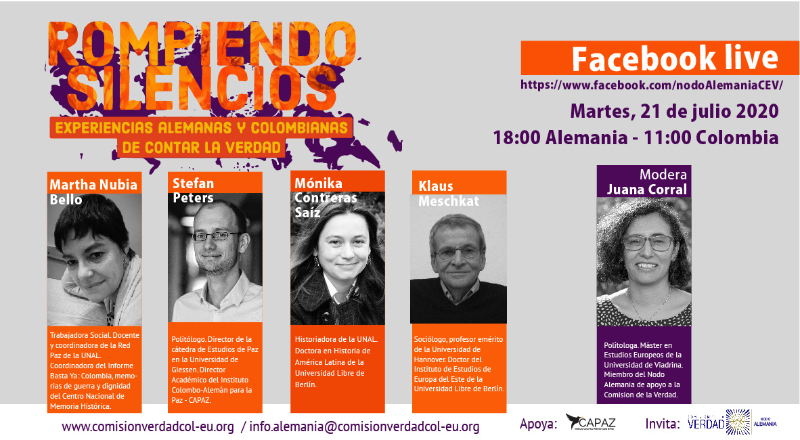 Germany and Colombia have both gone through periods of war and conflict, which have left deep scars. Despite the traumas they have experienced, both countries have managed to deal with the past in different ways.

The German Group supporting the Colombian Truth Commission will host an online discussion entitled: “Breaking the silence. German and Colombian experiences of telling the truth” on Tuesday, July 21, 2020 at 6:00 p.m. (Germany), 11:00 a.m. (Colombia).

You can follow and join in the discussion though the German group’s Facebook Live: https://www.facebook.com/nodoAlemaniaCEV/
Mónika Contreras Saíz, Stefan Peters, Klaus Meschkat and Martha Nubia Bello will participate as speakers, while Juana Corral will moderate the event.

The main question on which this initiative is based is: Why is it important to talk about what happened? Accordingly, the virtual event is aimed at academic and non-academic audiences who are interested in learning about past work experiences in Germany and Colombia.

The meeting will also serve as an occasion for Colombians living in Germany and in other countries outside Colombia to obtain information that will allow them to decide to contribute with their stories and testimonies to the truth work of the Colombian Truth Commission. The German group will present its work, as well as information on taking testimonies about the Colombian armed conflict.

CAPAZ supports the German group, Nodo Alemania, in its work to  in its work as a support group for the Truth Commission. The speaker at the virtual meeting will be the CAPAZ Academic Director, Stefan Peters.