Workshop on the experiences and challenges of political participation and democracy

Workshop on the experiences and challenges of political participation and democracy 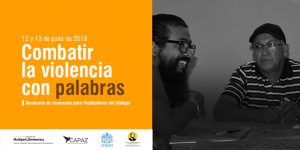 Pontificia Universidad Javeriana (PUJ) hosted the seminar-workshop “Fighting violence with words“, organized by the German-Colombian Peace Institute – CAPAZ and the Dutch Institute for Multiparty Democracy in Colombia (NIMD), with the support of the Alfredo Vázquez Carrizosa Institute of Human Rights and Peacebuilding, attached to PUJ.

The seminar took place in Bogotá on June 12 and 13, 2019. It was attended by representatives of social organizations, social leaders who have promoted spaces for dialogue, political participation, and non-violent conflict resolution in different scenarios and regions in Colombia. 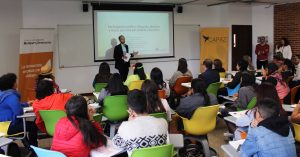 Prof. Dr. Stefan Peters, Academic Director of CAPAZ participated in the first day of the seminar-workshop. His talk was aimed at analysing and discussing the different forms of political participation, specifically democratic participation, and its relationship to peacebuilding.

According to Peters, peace in Colombia is now a violent form of peace. In this respect, he emphasized two latent needs: to guarantee the security conditions for political participation, and to train citizens on issues such as mechanisms of participation, representation or democracy.

He proposed three approaches to the issue of successful political participation; approaches based within education, social justice, and violence. The discussion focused mainly on the theme of education.

Some participants, who lead processes of political participation in their communities, validated the importance of education in these issues, but emphasized the need for dialogue to rethink current educational models, especially in Colombia’s current historical moment of the peace process.

They highlighted the educational and training processes in issues of political participation developed in Colombia’s different territories, and the role of social leaders in communities, regarding pedagogy for democracy and peace.

The conclusion was that valuable knowledge is generated in the regions and localities, beyond the academic spaces in the universities. 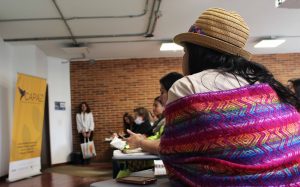 The school curriculum, which includes the peace programme, was questioned. Those who teach this programme need to be trained, as the educators are not sufficiently trained and the contents are taught in one hour per week at the most, generally and without any special emphasis.

The group of participants also focused on the issue of security and violence in the territories related to political participation. Representatives of the indigenous peoples of the Amazon stated that some mechanisms such as La Minga or tutela have been the only means of participation made available to these communities.

The participants expressed their disagreement with the way the central government ignores the realities of territories and communities when designing or applying guidelines. This is critical, given the cases of cronyism and corruption in institutions such as the Government Councils or the Registry Office. Participation exists but there is no transparency in the exercise of democracy.

Mauricio Sánchez, NIMD researcher focused his talk on questions such as: what conflicts are, how we deal with them, and what tools can enable their resolution.

He presented the project entitled “Spaces apt for multiparty and multiactor dialogue“, developed by NIMD in different parts of Colombia. This exercise gave rise to some reflections on the possibility of changing policies to make them more programmatic and focused on advocacy. 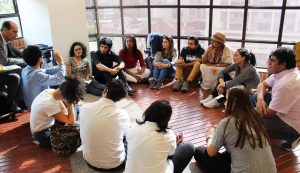 “It’s not that we’re new or that nothing has been done, nor is it that we’re discovering new things,” said Sanchez. The problem in Colombia is that there are no processes of continuity and that international cooperation sometimes takes an interventionist view in the territories.

The role of the mass media was also questioned in this sense, given that democracy and its achievements are not always part of the media agenda. As one of the participants put it: “We should be doing democracy every day.”

The first day ended with a group workshop led by representatives of the Corporación Otra Escuela, to develop skills related to interpersonal relationships and coexistence, based on encounters and positions in situations that generate conflicts, to resolve them in an assertive manner.

During the second day, the participants of the seminar exchanged their experiences in groups, based on three situations: 1) identify a personal conflict in terms of political participation, 2) which of the tools shared during the previous day can be used to reach a situation of cooperation or conflict resolution, and 3) which was your experience in this seminar.

The collective develops processes of memory building through cinema and audiovisual media. She presented a video on the work of the collective in her region and shared a heartfelt reflection on memory as a vehicle for transmitting and catalysing identities. 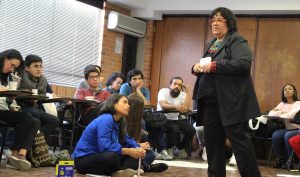 In the context of Colombia’s armed conflict, Soraya Bayuelo did not absolve the so-called perpetrators of their responsibility, but stressed that it is more about the healing effect of memory on the victims.

Memory dynamizes words and dialogue. Through the narrations of the victims, through the ways in which the facts are told, knowledge about the armed conflict in Colombia is gained from experience and channels of communication are consolidated with incidence in the regions, through the exercise of community journalism.

“They kill our leaders, because they know that when they do, the communities lose their voice,” stated Bayuelo. Narration is the natural expression of memory and serves the victims to give them their place in history.