The B-side of the conflict 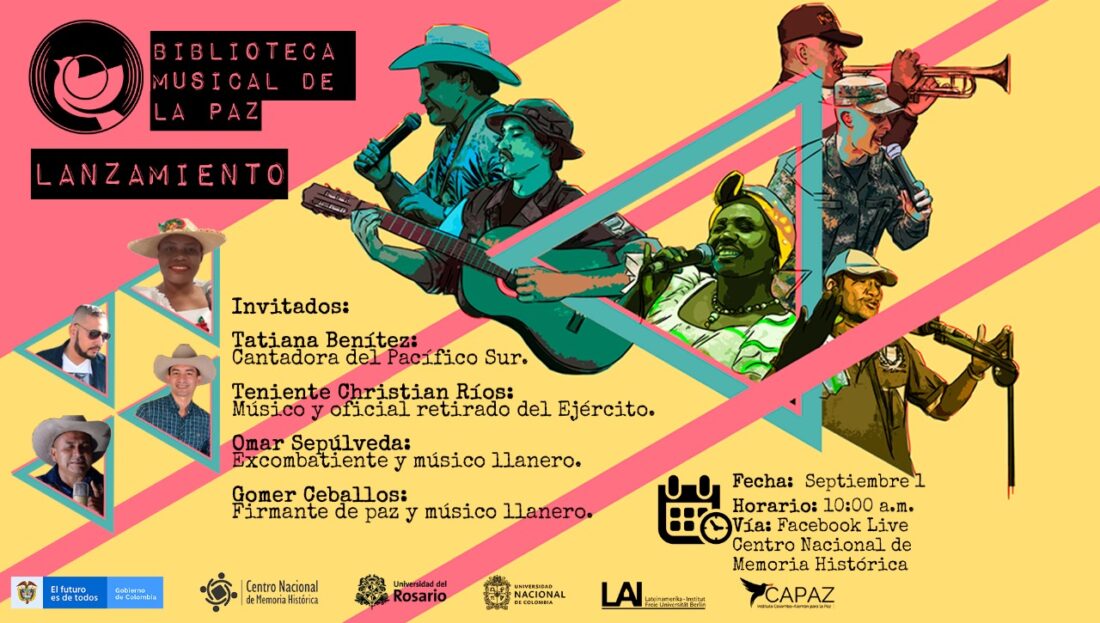 The B-side of the conflict

The CAPAZ-supported Peace Music Library will be launched on September 1st at 10:00 am (Colombian time). The platform’s contents are the result of research conducted by Universidad del Rosario, Universidad Nacional de Colombia, the Latin American Institute (LAI) at Freie Universität Berlin, with funding from National Center for Historical Memory and the Colombian Ministry of Science. The launch event will be accompanied by a discussion with former combatant musicians and members of the security forces. September 1st will also see the launch of a song entitled “Perdón”, created jointly by two former combatants; one from FARC and the other from the AUC.

The platform originated in a 2018 CAPAZ-funded project, the result of which was the systematization of databases of songs by former FARC members, as a means to investigate the discourse that was being expressed in musical pieces of all kinds. In 2020, the project grew thanks to a call for proposals from the National Center for Historical Memory, which made it possible to collect a larger number of songs. This time, the researchers set themselves the task of finding the physical pieces of the songs (CDs, vinyls, cassettes or recordings).

This is how the idea of the Peace Music Library —to be launched this Tuesday— was born. It is a web platform that allows artists to upload the audios and lyrics of their songs, and to publish information related to these songs’ history, performers, and production. The platform will help consolidate a large musical library on the armed conflict and peace.

Rafael Quishpe, one of the project leaders and CAPAZ Science Collaborator, commented that this work has made it possible for many people to connect with the conflict and its narratives in a special way, as music offers a means to address issues of forgiveness and reconciliation. This, says Rafael, does not necessarily happen because the songs are about war or their experiences, but because, by listening to the actors of conflict and peace sing about love, family, and friendship, we can see them as the complex human beings that they are, rather than as mere victims, victimizers or actors in the conflict. “It’s like connecting with the B-side of war”, the researcher commented.

Once launched, we expect to continue exploiting the platform’s pedagogical and illustrative potential through chronicles, interviews, reports, and trips to places where there are still many works to be recorded.

To learn more about the background of the Peace Music Library to be presented on September 1, please visit: