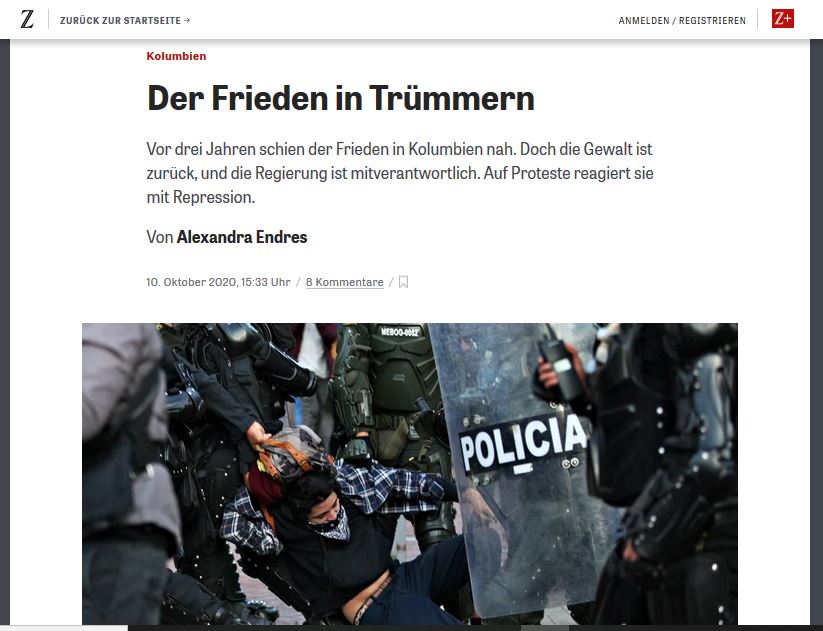 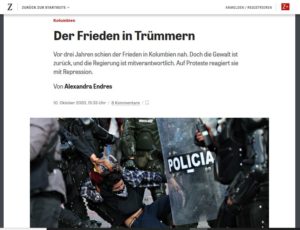 The prestigious German weekly newspaper Die Zeit published an article on peace in Colombia with a less than encouraging headline: “A peace in ruins” (in German: Der Frieden in Trümmern).

In the article, journalist Alexandra Endres presented the case of Colombian researcher and professor Lerber Dimas (Universidad de La Guajira), who arrived in Germany a few weeks ago to conduct academic and research activities. His departure from Colombia was untimely due to threats against his life, related to the issues he addresses in his research work and his social management activities, specifically in the Caribbean Region, near the Sierra Nevada de Santa Marta.

“Vor drei Jahren schien der Frieden in Kolumbien nah. Doch die Gewalt ist zurück, und die Regierung ist mitverantwortlich. Auf Proteste reagiert sie mit Repression” (“Three years ago, real peace in Colombia seemed to be within reach. However, the violence is back and the government is jointly responsible. It is reacting to the protests with repression”).

Read the full article in Die Zeit (in German)

In a press release published on its website a few days ago, CAPAZ officially announced Professor Dimas’ situation as evidence of the risk incurred by those engaged in academic and research work in contexts of violence.

Thanks to the joint management by CAPAZ, some German universities, the German Academic Exchange Service (DAAD), and the German Embassy in Colombia, for the time being, Lerber Dimas will remain in Germany indefinitely as a visiting researcher.